Sony has followed its 4K coverage of the Confederations Cup with another sporting first – a successful live 4K multi-camera broadcast of a rugby match to the IBC convention in Amsterdam.

The ultimate ambition of live sports broadcasting has always been to give the viewer at home the experience of actually being there at the match.

Now 4K pictures can go further towards realising this ambition than ever before, as delegates at IBC in Amsterdam this year discovered when they were show the world’s first live 4K 60P multi-camera sports broadcast.

A Saracens versus Gloucester rugby match was beamed live in 4K from the ground in North West London, UK to the RAI exhibition centre where it was broadcast and watched by IBC delegates.

As BT Media and Broadcast Senior Propositions Manager Alison Hutchins explains: “It was the very first multi-camera ultra high definition 60P international broadcast of a sports event and the result was very engaging.”

Ultra High Definition is a beautiful format for live sport…. it’s the beginning of the creation of a new language of sports production.

Executive producer Bill Scanlon says that 4K images gave the viewer much more “on screen real estate” to entertain them. “What really excites me as a sports producer about 4K is being able to see all the grunts, expressions and emotions on the faces of the players – something you don’t get with HD picture quality.”

Scanlon argues that live 4K broadcasting could transform the world of live sports production. “Ultra High Definition is a beautiful format for live sport,” he says. “It’s progressive, its 60fps, you don’t get motion blur and you have incredible image detail. It’s the beginning of the creation of a new language of sports production.”

Hutchins adds: “With cameras like the Sony F55 camera shooting 4K on Fujinon lenses viewers were able to look around the screen themselves because there is so much to look at. This means that OB directors don’t need to zoom in on the action so much and give all the different angles.” 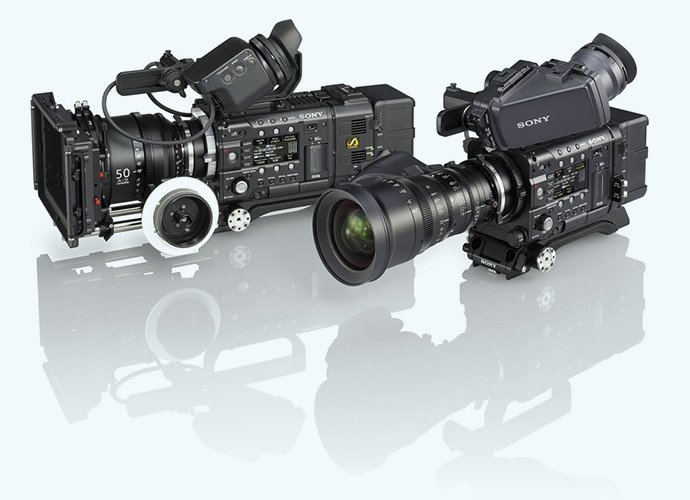 The match was shot on three Sony F55 4K cameras fitted with Sony CA-4000 Fibre Transmission Camera Adaptors, which were used to get the 4K images from the camera into the live broadcast environment housed in a 4K capable Telegenic OB truck.

The images were then fed into the Sony BPU-4000 Baseband Processing Unit which took the camera feeds and de-muxed them into streams which were fed into Sony MVS-8000X switcher with the support of a specialist 4K software upgrade.

After the 4K live images were mixed by director Gordon Inglis in the outside broadcast truck they were encoded with Ericsson AVP 2000 Contribution Encoders.

What really excites me as a sports producer about 4K is being able to see all the grunts, expressions and emotions on the faces of the players – something you don’t get with HD picture quality.

The signal was then transmitted as a 100 Mbps video over the BT Global Media Network via BT Tower in London to the IntelsatOne terrestrial network.

From there it was sent to Intelsat’s teleport in Germany, where it was uplinked to Intelsat 1W, Intelsat’s leading cable and DTH video platform in Europe, using Newtec’s M6100 Broadcast Satellite Modulator, which reliably processed and transmit the content.

The resulting 422, 10-bit, 4K UHDTV signal at 60 frames per second was beamed to the RAI in Amsterdam, where it was decoded and displayed on 4K viewing facilities on the Intelsat, Ericsson and Sony stands at IBC2013, allowing attendees to view live 4K rugby for the first time.

BT Media and Broadcast vice president of sales and marketing Mark Wilson-Dunn concluded that: “Working with leading technology partners such as Sony, Ericsson, Newtec and Intelsat we have proved with this demonstration that the transmission of live sports broadcasting in 4K is something that can be delivered today.”