For its return to the show with a physical stand, the company will showcase its vision for the industry, around the 3 pillars of Creators’ Cloud, Networked Live and Connected Content Acquisition.

Amsterdam, 9th September 2022 – Sony is delighted to announce today at International Broadcasting Convention (IBC) 2022, held in Amsterdam, a series of new products and solutions that support its vision of Architecting the Future of Media. This ambitious new direction for Sony rests on 3 propositions that will shape the future of the content industry and continue to fill the world with excitement.

Sony as the architects of this vision, will bring new technologies to life enabling Production Anywhere at Any Scale through IP for industry player, with a growing focus on sustainability. This strategy will rest on 3 pillars developed by Sony: Creators’ Cloud, Networked Live and Connected Content Acquisition.

Olivier Bovis, Head of Media Solutions, Sony Europe, comments: “When we look at the future of the content industry, with the explosion of content channels and demand of the recent years in mind, we know we need to move away from one size fits all products and move towards a building block solution strategy, where we introduce ecosystems that are highly modular at every step of the production chain. This modularity is the key for customer to deliver on their business and sustainability goals.” 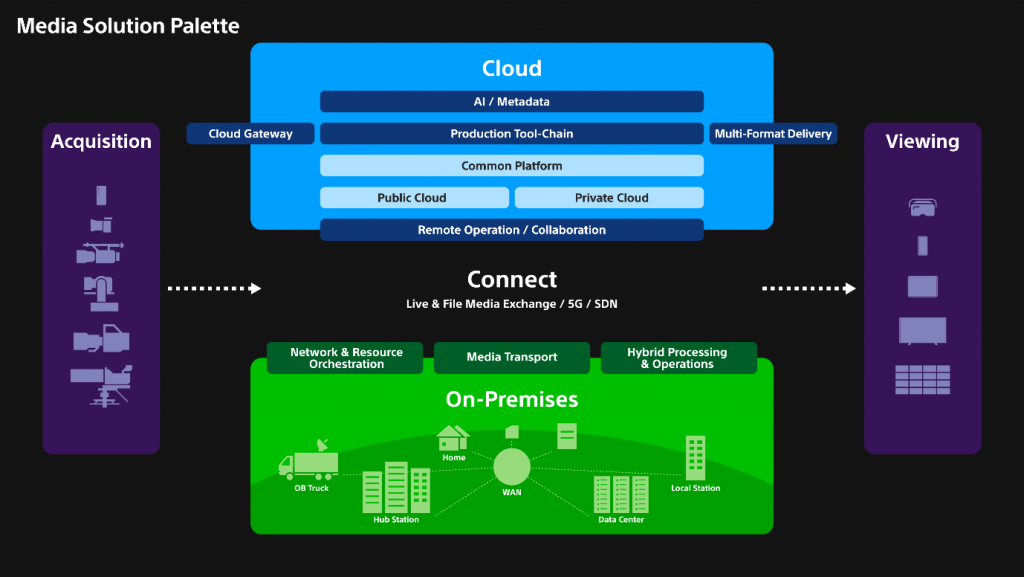 Today Sony is introducing an ecosystem of cloud tools, services and integration points built with security, user centricity, and scalability as the defining approach for production technology. Creators’ Cloud is the next-generation cloud production platform of content acquisition, creation, sharing, and distribution, from any network to any device.  Creators’ Cloud will see the federating of the existing strong Sony suite of cloud-based solutions such as Ci or C3 Portal with new tools such as M2 Live, a scalable cloud based Live processing service for OTT (Over The Top) content distribution, and A2 Production, an AI automated production solution for workflow efficiency and content enrichment (please see below for more details).

In the near future, the ecosystem will be built with a user centric approach, offering Single Sign On, common storage and billing through common authentication. Any content creator, be they freelancers, OTT, production companies or broadcasters will be able to tailor the tools and platforms to their needs, optimizing usage and avoiding redundancies by leveraging the elasticity of the ecosystem. 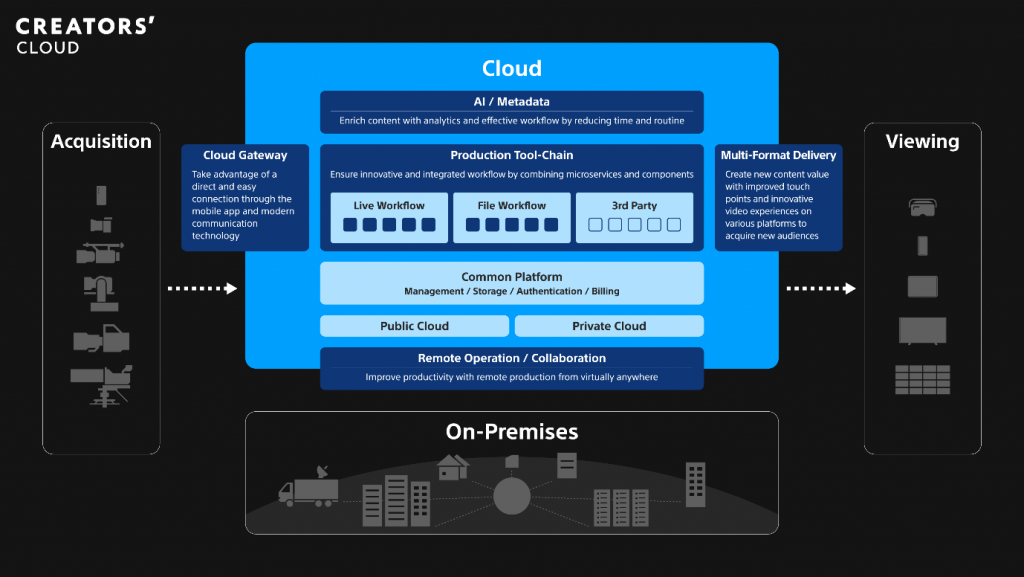 Creators’ Cloud will allow images from various types of cameras to connect directly, upload and store content in the cloud. Different video formats, look and feel and versions can then be quickly produced to pre-existing requirements.

Sony’s “Cloud Gateway” enables direct content to the cloud connection using tools like C3 Portal to transfer files or the live feed from a camera through mobile applications with network communication devices such as 5G smartphones. Furthermore, C3 Portal is now compatible with the shoulder camcorders PXW-Z750, PXW-Z450, PXW-Z400 and the existing compatible cameras PXW-Z280 and FX9 will see their connections with the C3 Portal strengthened *1.

Producing in the Cloud

As part of its Creators’ Cloud vision, Sony’s “Production Tool-Chain”, based on a Microservices Architecture, will allow amongst other things, simultaneous live and file-based remote video production, remote operations and collaboration, and the continuous enrichment of workflows with AI powered Metadata.

Sony is also announcing today its new AI automatic production system, A2 Production, an expansion of its existing Media Analytics Portal offering: by pooling different AI capabilities from Sony and other companies and integrating them, production workflows can be streamlined for file editing, managing, and distributing. For example, by using the metadata generated at image capture, highlights can be automatically generated for sports, and the production preparation process can be automated.

Managing and collaborating in the Cloud “Ci Media Cloud”

Delivering from the Cloud

Multi format delivery creates and maximizes content value by allowing delivery and distribution of content in the optimal format for multiple channels. This optimises content monetisation.

Sony is announcing today M2 Live which stands for Multipoint to Multipoint Livea scalable cloud based Live processing service for OTT (Over The Top) content distribution, without the requirement to use ground resources for unilateral productions. Pure cloud-based software enables users to deploy an OPEX approach to a significant part of their workflow. M2 Live’s focus is on small event production, where high value presentation is needed but simplicity of operation is important. By using an easy to operate Scene-based user interface, and the Sony’s A2 Production for automatic highlights creation, complex and sophisticated programs can be streamed to social media channels.

M2 Live can also be used as an OTT streaming tool for the localisation of any main programs. Taking the multi-lateral clean feed from a sports event for instance, localisation can take the form of additional graphics or logos, unilateral camera inputs, local language commentary and replays. The Tally/Return function provides smooth collaboration with an on-site operator and for data transmission from the camera in the field to the cloud, a stable remote connection is created through the Sony QoS protocol provided by the application on the compatible Sony’s camera or smartphone.

In live production where the image composition changes from moment to moment, by preconfiguring composition, M2 Live will allow a simple recall of scene settings to instantly and efficiently create highly sophisticated production effects.

Sony is already collaborating and will expand its collaborations with 3rd party partners for Creators’ Cloud ecosystem at every step of production, from acquisition to distribution. As an example, in August 2022, Sony and Teradek announced an upcoming integration which will enable on-set productions to directly upload from Teradek’s encoder products to Ci Media Cloud. In addition, the same file upload linkage to C3 Portal is also under development. Sony will be demonstrating these camera-to-cloud workflows with Teradek for both Ci Media Cloud and C3 Portal at IBC. 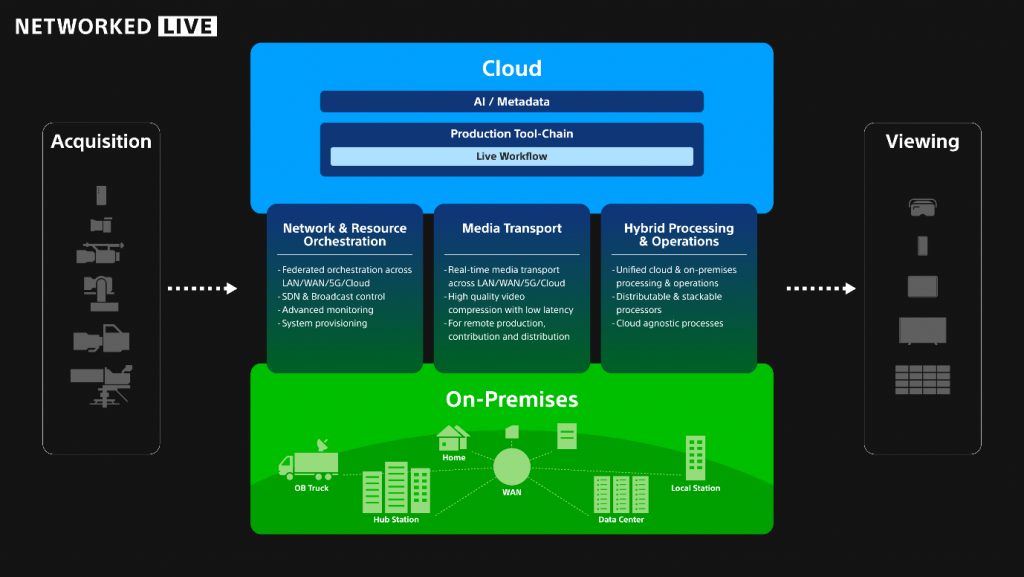 Sony and Nevion are announcing today several new services and products that will continue to accelerate the transformation of workflows to facilitate distributed and remote production: Networked Live heralds a new era of on-premise/cloud hybrid distributed production solutions, which increases the potential for remote and distributed production, based around universal connectivity. Resource sharing between geographically distant locations enables high quality live production and processing from anywhere. This will allow users to produce anywhere and at any scale, levelling up the quality of productions overall and increasing efficiencies through a better distribution of people and technological resources – overall ensuring long term business sustainability.

Nevion has introduced federated orchestration to its VideoIPath network solution, which allows the control and distribution of systems and resources, avoiding the risk of a single point of failure and allowing the combination of sub systems into bigger systems, for remote & distributed operations. This again adds scalability, key for optimizing resource management orchestration for production resources, and network signal transport.

Nevion also announced that its flagship media orchestration platform, VideoIPath, is being integrated with AWS Media Services, with an initial focus on ground-to-cloud connectivity and integration with AWS MediaConnect and MediaLive services. This enables a video source from the ground to be connected to a MediaConnect instance in the AWS Cloud and distributed to other MediaConnect instances in other regions, or back to the ground – effectively allowing the AWS Cloud to be used as a transport network.

The new Modular Live System MLS-X1, one of the key new components of Networked Live, is a modular, scalable and reconfigurable Live Production Processor and Switcher.

Whether on-premises or in the cloud, onsite or remotely, the MLS-X1 enables integrated operational control of processors at multiple locations from a single user interface.

Each MLS-X1 unit is connected by a network, and its physical structure can be changed dynamically bringing the agility to scale up or down according to present and future production needs. Thanks to the modular concept, logical switchers can be configured and interconnected using one to multiple MLS-X1 units as needed, avoiding the need to prepare in advance for excessive capacity or functionality. Redundant systems – an essential for live production – can be flexibly selected from different modes. It can also handle multiple simultaneous productions produced with one or multiple panels and crews, as the programme requirements demand.

In the future, the MLS-X1 will be able to integrate and be operated from multiple systems, not only for remote production, but also on-premises and on the cloud.

The MLS-X1 builds on the established reliability of Sony switchers including its XVS-G1: its innovative architecture adds a GPU-based effects and graphics module to the processing structure, providing flexible video processing power. Hardware accelerated processing supports real-time processing of 4K (UHD) and High Dynamic Range (HDR) video with ultra-low latency. The latest addition to Sony’s range supports 4K/HD multiformat production, with up to 6 M/E, 4 channels of DME and 6 keyers per M/E in UHD. In addition to the Format Converter, HDR Converter is included, and native HDR support is provided as a system format.

Sony is reinforcing the connectivity and capabilities of its cameras, allowing users to do more with their content at the point of acquisition, supporting the development of remote operations.

A high-performance full-frame image sensor and the expressive scope of Sony’s extensive E-mount lens lineup work with remote pan/tilt/zoom control, high flexibility in zoom capability and wide angle shooting to break through location and space limitations. It also offers the cinematic look and operability that have made Sony digital cinema cameras push the boundaries of the filmmaking industry, plus versatile connectivity and efficient multi camera workflow support.

In addition, Sony will showcase a virtual production solution bringing together Crystal LED B series and VENICE 2.

Sony continuously listens to cinematographers and creators and delivers innovative products like its Cinema Line and CineAlta Line, to fulfill their different creative needs, furthering the development of superior content creation.

Products shipping dates and pricing will be available on demand and will vary from region to region.