The official inauguration of Novi Sad as European Capital of Culture 2022 was accompanied by the state-of-the-art “Time and Universe - Exhibition of Time”. The authors of the project created at Studio M are artists Dr Dusan Jovovic and Prof. Dr Aleksandar Petrovic. 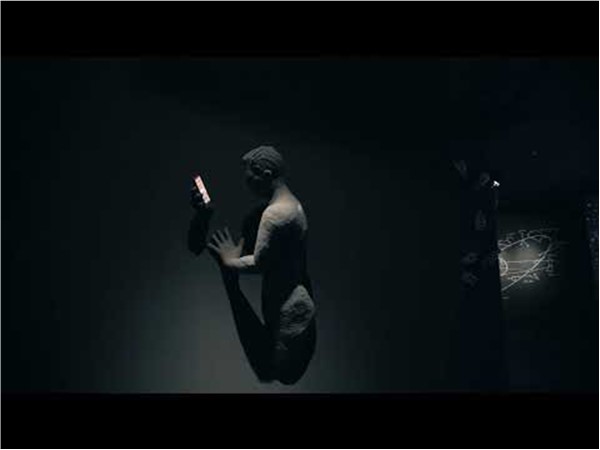 Kaunas in Lithuania, Esch in Luxembourg and Novi Sad in Serbia are the three European Capitals of Culture 2022. The latter city has earned the nickname “Serbian Athens” due to its rich cultural traditions. Audiovisual production was handled by AVL Projekt using Sony VPL-FHZ91, VPL-FHZ75 and VPL-PHZ60 laser projectors.

The two-storey, interactive multimedia exhibition at Studio M consists of several arrangements combined into an ideological whole. It shows the passage of time in different cultures and the historical dynamics of light and darkness as creation and destruction that form part of the overall experience of existence. Framed by a story about duration, this exhibition guides visitors through the development of civilization, and culminates in the presentation of Serbian astrophysicist Milutin Milinkovic’s code.Prominent artist Dr. Dusan Jovovic was in charge of creating the visual artistic content of the exhibition, while the author of the narrative is a connoisseur of the scientist’s life and work, Prof. Dr. Aleksandar Petrovic.

AVL Projekt participated in this large and important project for Novi Sad by providing various types of projections on sculptures and installations with innovative 3D mapping technologies. The project used laser projectors with light source life of 20,000 hours, high contrast and saturated colours. Sony VPL-FHZ91, VPL-FHZ75 and VPL-PHZ60 projectors are equipped with lenses that enable free movement of visitors around the exhibition without creating shadows on the projection surfaces.The projectors deliver WUXGA (1920×1200) resolution and are equipped with HDBaseT inputs for easy distribution of AV signals via S/FTP Cat6 cables.The projectors can be installed flexibly due to the wide range of vertical and horizontal lens shifts, as well as the possibility to operate the equipment in any position (360°). The edge blending function is also a great asset, making it possible to realise the creator’s vision by creating combined images.

A projection surface of any size (18x3m) and 360° mounting, on the floor, in a trapezoidal panel (15x10x14x6m), is possible thanks to Christie Pandora Box mapping media servers. They support real-time 3D projection, deformation and editing of multiple mapping object files to create any shapes and surfaces.The last stage set features a holographic 3D representation of Milutin Milankovic, who takes visitors on a journey through time. The holographic projection was created with the help of special foils – mirrors.To illuminate the entire exhibition space, several rail lighting systems with Chauvet EVE TF-20 LED light fixtures, dimmers and LED drivers were installed.

To control the AV system, a device with predefined scenarios was used enabling simple operation of the entire projection system and centralized switching on and off of the devices. Multimedia content is broadcast via HD network players, synchronising the operation of multiple devices to create a unique projection image, while RCF AYRA PRO5 dual-system active studio monitors play audio content for different stage sets.

AVL Projekt set up the projectors and programmed the media server for mapping the stage sets in line with the required visual solutions.