How can Sony Professional HDR help you?

Sony Professional HDR can offer the solutions you need to create visually stunning HDR images, for any production.

From cinematography and TV broadcasting to live events and corporate videos, we’ll help realise your vision with a comprehensive portfolio of hardware, recording formats and workflow options – from acquisition to post-production and mastering.

HDR delivers an immersive viewing experience capturing bright highlights and deep shadow details
with delicate nuances of color, just as if you were looking at the scene with the naked eye.

Learn about the use of HDR technology in today’s productions >

What are the benefits of HDR?

Learn about the technology behind HDR and how it improves images. 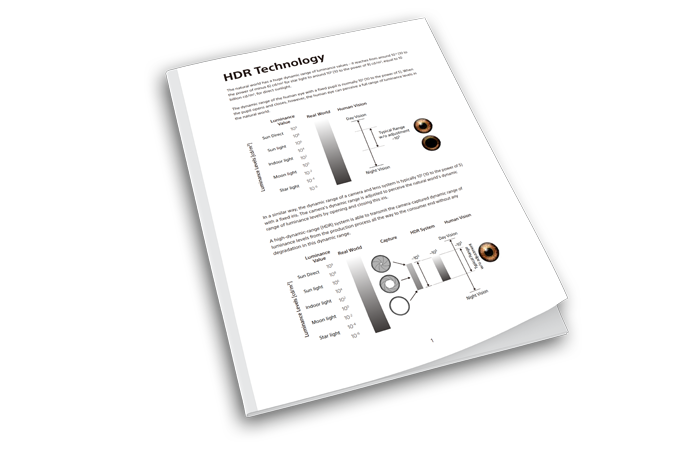 There’s a choice of HDR workflow options from Sony Professional to satisfy every production need:

• For movies, drama, documentaries and commercials where image quality is paramount

• For events and corporate productions that balance quality with cost

At Sony we understand the goals and challenges of all these production environments. You’ll see this reflected in our innovations for HDR production. Like our S-Log gamma curve that captures extended dynamic range information to match every artistic intent. And our X-OCN recording format that can faithfully reproduce the same rich tonal information as RAW in far smaller files.

HDR captures subtle expressions of light and shadow to amplify the imagination of every storyteller.

All our latest CineAlta cameras including the acclaimed VENICE are HDR ready, supporting the efficient X-OCN format with our AXS-R7 portable memory recorder.

Learn more about the leading-edge technology of VENICE >

Sony introduced the SR Live system for the creation of SDR and HDR programs in live production in 2016. Sony’s SR Live for HDR workflow reduces the costs and complexity of simultaneous HDR and SDR programme production by a single crew.

Why use Sony SR Live?

The choice of industry leading broadcasters, production houses and OB Truck Companies around the world, SR Live for HDR offers these compelling benefits:

• Simultaneous creation of both HDR and SDR programme content

• ‘As-seen’ conversion, to maintain creative intent throughout the production and delivery chain

In an SR Live production workflow, it is recommended that 4K HDR is used as the principal production format, allowing conversion to any format required for distribution. During shooting, the Video Engineer can perform simultaneous production of 4K HDR/HD SDR by adjusting the HD SDR output as described at, “SDR-based camera shading”, below. This eliminates the need for a dedicated crew for HDR adjustment and enables efficient operation that follows the conventional HD production workflow.

These are the summarised key features of Sony SR Live – more detailed information is available in our latest Whitle Paper, downloadable at the link on this page.

The HDRC-4000 can support a wide variety of video signal conversion, including 4K HDR, HD HDR, 4K SDR and HD SDR – without signal loss and while achieving greater workflow efficiency.

Importantly, this means that the same picture tone after conversion between 4K HDR to another 4K HDR format, is retained. It is also possible to achieve the same HD SDR image matching after 4K HDR to HD SDR conversion has taken place, at later stage in the production process.

The HDRC-4000 can also provide “as seen” conversion of the AIR Matching function to faithfully retain the producer’s artistic intent, across any distribution format, throughout conversion.

While SDR remains prevalent, broadcasters and production houses must avoid degradation of the SDR production workflow – even if they’re producing in HDR at the same time. With SDR-based shading, camera operators (shaders/painters) can continue using their knowledge of picture quality in SDR production for both SDR and HDR images.

Sony’s recently introduced SR Live Metadata packet stores 26 parameters, describing creative decisions and camera adjustments made by camera operators during production. Embedded within the SDI signal, this metadata provides information to allow exact duplication of the SDR programme from the HDR layer. This is available even if conversion from HDR to SDR takes place at a later stage in the production process at the broadcast station. It also allows metadata parameters to be checked visually, both live and during post-production.

The principle of SR Live for HDR workflow

Find out how Sony’s SR Live for HDR helps create programmes simultaneously in HDR and SDR – all with a single, highly efficient workflow. 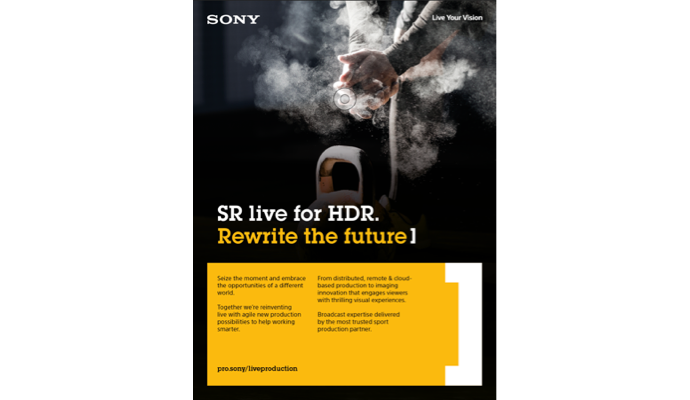 See more on how Sony ‘instant HDR’ can transform your content >

Produce in High Dynamic Range (HDR) and maximise the appeal of all your content – from sport, live entertainment, drama and cinema to commercials and corporate productions. We’ve got the creative HDR tools for every production including live system cameras, large sensor cameras, camcorders, switchers, servers, recorders, monitors and creative software.

Shoot spectacularly detailed images that spark even more excitement and audience immersion – in 4K and 8K.

The choice of discerning cinematographers, documentary makers and content creators.

Catch all the excitement and realism of the moment – capture arresting HDR pictures in any situation.

Sony Professional introduces the technology and its benefits to workflow.

Discover how we can help you move your audience with your next live production, whatever the scale.

Shoot, edit and view HDR content in HLG without the need for additional colour grading