Despite the great strides made by 4K TV sales in Taiwan, TV stations, especially terrestrial stations, have recognized the need to increase production of original 4K content more suited for local consumers.

One such station is free-to-air Chinese Television System (CTS) which is part of the Taiwan Broadcasting System.

Said Chao-I Lee, Manager Engineering Department at CTS: “In line with the nation’s ‘Forward-looking Infrastructure Plan,’ CTS has identified 4K as a key component of our goal to bring high-quality local programmes to our viewers.”

Founded in 1971, CTS is renowned for its wide range of quality programmes including dramas, variety shows and sports.

Till today, CTS is well remembered for its 350-episode Chinese drama classic Justice Bao which was launched in 1974. It was the longest running TV series produced entirely by CTS and aired in over 80 countries. The series is still enjoying a cult following. Most recently, CTS was the exclusive TV station to broadcast the 2017 Summer Universiade, an international multi-sport event that was hosted by Taiwan.

CTS assessed several 4K partners and after a lengthy evaluation selected Sony. It was the first time that CTS has acquired Sony equipment for its studios. 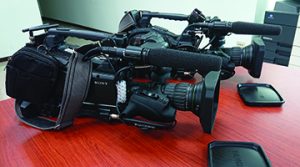 The Sony 4K equipment selected by CTS include the BRC-X1000 – Sony’s first 4K remote camera. CTS identified this compact and powerful robotic camera for its uncompromising picture quality as well as its versatility to complement other broadcast cameras for capturing images in hard-to-reach positions. The remote camera can be easily deployed in TV newsrooms, remote studios and sports stadiums. It’s also particularly suited for efficient multicamera set-ups under the control of a single operator.

Another equipment that impressed Chao-I and his team was the Sony PXW-Z450, the world’s first 4K HDR shoulder camcorder. Continued Lee: “The BRC-X1000’s low-light sensitivity and silent pan-tilt zoom functions were standout features. Together with the PXW-Z450 shoulder camcorder, it will give the CTS crew more creative options.”

Lee concluded: “We’re very encouraged by the seamless integration of the new Sony equipment and we’re confident that CTS will continue our collaboration with Sony.”