Indian cinema is a global enterprise and thriving. India churns out more films than any other country on earth, and probably in more languages too. Indian films are without doubt one of India’s most popular exports reaching audiences in over 90 countries.

It’s certainly a first for India if not the world, a full-length feature film that revolves around a kite flying competition. The makers of Gabru Gang, have even submitted the film to the Guinness Book of World Records to have it recognised as the “First film in the world on kite flying”.

When Director Sameer shared the script and storyline with Sunil Patel, a Director of Photography, Sunil instinctively recognised the film’s potential and the camera he should be using.

A highly-regarded DoP, Sunil cut his teeth doing TV commercials before shooting Bollywood movies. His film credits include Back Bencher, Happy Phir Bhag Jayegi, Bang Bang and Murder 3, among many others.

Sunil was very familiar with Sony cameras. He recently worked with Sony’s F65 CineAlta camera for Bang Bang and was pleased with the results. It was while filming the end credit song for Happy Phir Bhaag Jayegi that Sunil first had the opportunity to test the VENICE, Sony’s revolutionary Full Frame Digital Motion Picture Camera System.

VENICE is a cinema camera created by and for the cinematographer. It’s equipped with a newly developed full-frame image sensor to meet the needs of the film industry in pushing the boundaries of large format capture and deliver exceptional picture quality.

Says Sunil: “I was absolutely delighted when I saw the gorgeous footage shot on Sony’s VENICE at the DI studio. I knew instinctively that I had to use VENICE for my next movie, and along comes Gabru Gang.” 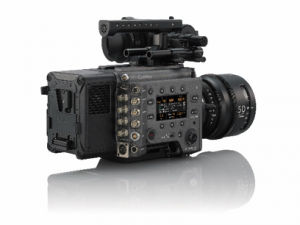 “I love the look and feel of the VENICE. Sony has got the ergonomics spot-on with this fantastic camera. We used the VENICE as our principal camera for Gabru Gang,” adds Sunil.

VENICE’s user-friendly design, clear and simple menu navigation allowed Sunil to focus on his craft, and not on the camera.

He says: “VENICE had the fastest booting time of 5 to 7 seconds after which you’re ready to roll. The entire range of motorised ND filters (8 built-in) allowed us to control the exposure easily. Our Version 2.0 firmware was upgraded to dual ISO which added an additional 2500 base ISO to its earlier 500 base ISO.”

Sunil was so impressed with VENICE’s wide latitude, colour gamut and velvety-smooth picture quality that he has again opted to work with this game changer for an upcoming Hindi language movie Pagalpanti.

The romantic comedy which will be shot in London, England features a stellar cast including John Abraham, Anil Kapoor, Illena D’Cruz and Arshad Warsi. For Pagalpanti, Sunil will be deploying two units of VENICE and teaming them up with a combination of Zeiss and Leica Summilux lenses.