Sony’s affordable switcher makes it easy for a single operator, or small team, to produce a broadcast quality live event. Award-winning DoP Jeremy Humphries put this to the test by asking London’s leading TV Community Channel to cover one of London’s biggest events with an MCX-500-based solution.

Loading video...
London Fashion Week (LFW) is one of the big four fashion weeks, a peer to Paris, Milan and New York that attracts over 5,000 press and buyers. It’s a big event to cover, and also challenging with lots of things happening all at the same time: a busy catwalk, of course, but also crucial reaction shots from the judges, glamorous visitors and VIPs.

MediaTrust’s Youth Media programme London360 sits on the Community Channel and offers free media training to young Londoners. It’s a much sought-after internship and the team I assembled were poised presenters and talented camera operators. But I needed an additional skill. The fashion show demanded dynamic editing, often to the beats of the music. So they had to be to be good editors, able to think on their feet – crucial with up to four video feeds to choose from on the MCX-500‘s multi-view screen.

As our primary camcorder, we chose the HXR-NX5R which offers exceptional integration with MCX-500. HDSDI connections carried video with up to four channels of embedded audio that the MCX-500 itself could switch between. An additional RM-30BP Remote Commander offered advanced remote operation of the NX5Rs as required via a remote connection.

We also had a pair of SRG-300H remote cameras that particularly impressed with excellent image quality. Both of these linked into the MCX-500 using standard 10-metre HDMI cables. For multi-view monitoring, we used a Sony PVM-A250 25″ monitor that proved ideal on a compact shooting location. Both NX5R cameras were equipped with UWP-D wireless audio kits that were connected through the MI shoe which meant we did not need to worry about additional XLR cables or batteries for the receiver. 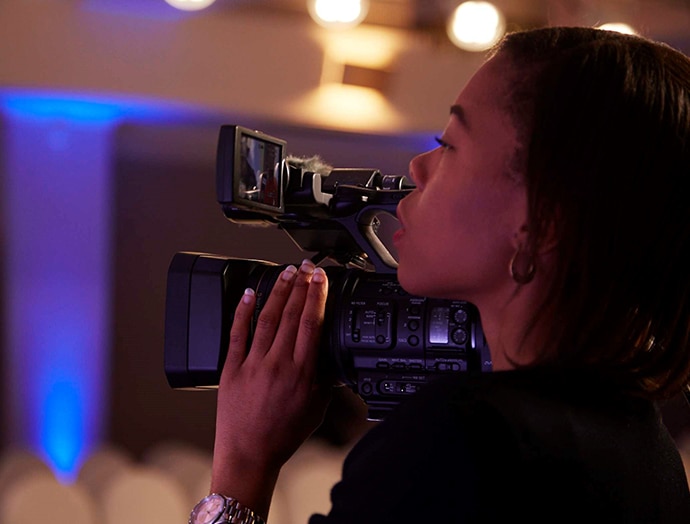 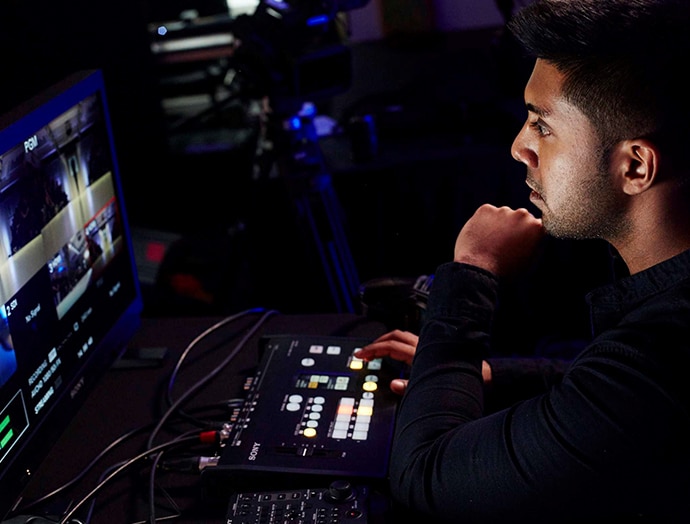 The two day event at London Fashion Week was busy, but fun. Our training and the MCX-500 ease of use made for a quick set-up and I soon had one of my team presenting while swopping the other two between operating one of the cameras and operating the MCX-500.

They were long days – we were still recording late into the evenings, so concentration on the multi-view screen was as important at the start of the day as it was at the end. But the team started to smile as they gained confidence with the mixing. Once they got into the rhythm of using the switcher, it became second nature to make a cut, quick dissolve or an audio level adjust. I watched their eyes concentrating and flitting between the camera feeds on the monitor; their fingers on the buttons, a business like blur!

“Having filmed and edited a multi camera feature in the past I was immediately intrigued by the MCX-500 switcher,” commented Laurelle Campbell. “The idea of being able to switch cameras live, as opposed to in the edit is fantastic. As the shoot was during a fashion show, it was important not to be obstructive to the show or the show’s organisers. The size of the kit made it easy to set up and keep everything neat and structured during the shoot. I would definitely use the MCX-500 again in the future for live events such as panel discussions.”

Rishi Persaud was similarly impressed: “The idea of being able to manage a set of several cameras through a single piece of equipment is a game changer compared to how we normally operate. Fantastic!”

“The MCX-X500’s ease of use and functionality can be a real money (and time) saver. When you know what it’s able to do – its simple, clean design can almost leave you perplexed as to how such a compact, portable machine can run an entire shoot.”

Maleena Pone commented: “As a multi-skilled video journalist I am often responsible for running the entire operation on my own from producing, self-shooting/directing and editing lots of my projects. Having such a user friendly and nimble piece of on-location equipment that you can operate from the comfort of your chair, saves lots of time and makes a huge impact to my capacity to multi-task and maximise creativity during a shoot. I’m seriously impressed and am already thinking of ways I can use this for future projects, from Facebook Live discussions to pre-recorded corporate events.”

At the end of the shoot, being able to quickly take down the equipment was appreciated, particularly as the whole lot – mixer, cables, monitor, a couple of cameras plus tripods – all fitted into the back of a small car.

The heart of our LFW shoot, the MCX-500 itself, is about the size and weight of a laptop but it’s built with Sony’s decades of experience in delivering broadcast quality and reliability. You can cut or mix your own video and audio, professionally and easily. Plan your camera angles, cable them in to the mixer, turn on the monitor and then sit back and watch on the screen as all your camera outputs are shown on the screen before you. Each camera has a clearly identified feed, and the keyboard on the mixer enables you to cue your shot up on the monitor before cutting from shot to shot and streaming it out live or recording to a SD memory card.

The keyboard on the mixer allows you make dissolves and wipes between shots via the auto transition button. Titles and graphics can also be fed in via a laptop and RGB cable. Audio levels are clearly visible and you can also monitor with headphones if you wish.

The NX5R is a perfect companion to the multi camera live producer. Its 3-chip 1/2.8-type sensor can still give a nice shallow depth of field and also has a remarkably good dynamic range. Perfect for all those high contrast events you might be covering. Perfect for those moody shots too. The camera has a 20x optical zoom that allows you to get that close up shot, even when you can’t get close yourself. 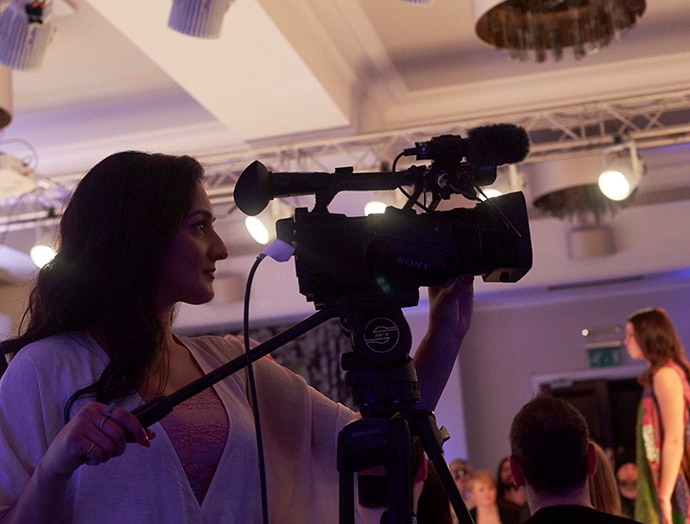 And the beauty of the whole set up is that if you are running the operation on your own, you have everything you need in front of you, screen and mixer. You can adjust cameras from your seat with the RM-30BP remote, controlling zoom, focus and exposure. If you have got camera operators, then you can even send them a tally signal so they know their camera is on-air. The workload is designed to be simple and accessible so you don’t need lots of people. The user-friendliness of the kit was best illustrated in our scenario by how our team multi-tasked. Individuals could present in the morning and be the live producer in the afternoon.

We also appreciated all the recording options provided by the MCX-500. You can record directly to an SD card in the switcher itself or to an external recorder, in either case all the cuts and transitions are captured so we could hand over a complete recording of the show as soon as it ended. For this application Sony recommend SD, SDHC or SDXC Class 4 cards or better. The 94MBps cards work particularly well and a single 32GB SD card can record a little over 3½ hours footage at 1080/50i (17Mbps).

For many people a live broadcast and/or SD card recording would be the end of a project. However, the MCX-500 also gave us the ability to take that master show recording and create an alternate cut in post-production, upconverting from 50i to 50P to really show off the cameras’ quality. Yet more options came from the dual record function, with each camcorder making its own internal recording independent of the MCX-500. A valuable back-up and source of additional footage if a client asked for alternate cuts.

The MCX 500’s size and price is deceptive. We didn’t have need to use them, but we had Chroma Key, Streaming and Picture in Picture functions available to us. Also – and I really liked this too – the remote RM-30BP can send a ‘standby’ and a ‘record’ tally indicator direct to the camera’s LCD so the operator knows his or her camera’s status in real time.

Looking back on the shoot, I felt that the MCX-500 truly delivered on its concept; enabling three enthusiastic, but youthful media interns to shoot a live event with multiple camera angles and deliver broadcast quality coverage. All with minimal training and using kit at an entry-level price-point that’s remarkable to a broadcast veteran such as myself.

Jeremy Humphries is a Sony ICE trainer and an award-winning BBC trained Director of Photography with over 30 years’ experience working on documentaries for BBC, C4, ITV, National Geographic and the Discovery Channel. Jeremy’s training company, Skills2Film, provides extensive camera craft training for clients ranging from the BBC Academy to Sony to the corporate financial sector.

London360 is a six-month, free, multi-media training programme for diverse young Londoners hoping to break into a career in television. The programme is managed by Media Trust, the UK’s leading communications charity and enjoys generous support from media professionals across the industry who share their communications and media knowledge, expertise, skills and time with the young people taking part.

All the inside details on Sony’s innovative entry-level live production switcher.