Sydney, 7 November 2018 – Recently UTS, the Australian Rugby Union (ARU) and the Sydney Cricket & Sports Ground Trust (SCG Trust), came together in an exciting partnership to develop the new Rugby Australia Building at the Moore Park sporting precinct in Sydney. Part of the fit-out of this state-of-the-art new facility included a Skills Acquisition and Motor Learning Lab – a testing facility specifically for invasion games such as football, rugby and basketball. The brief for the audiovisual system in this space was to deliver a large screen that displays life-like images and videos while also being able to absorb impact from balls being projected towards and to bring all of this together they chose a Sony VPL-FHZ120L projector. 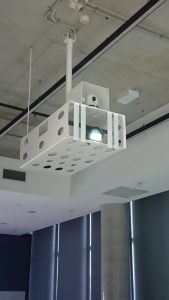 Manager, AVS Solutions Planning & Design, UTS Alex Ruch explained, “The main requirements were a laser projector that delivers a vibrant, contrast-rich picture which could be mounted relatively close to the screen so people in the training facility would not be standing in the light path. The projection surface, at 280” wide, is the largest single screen at UTS, and the room gets a lot of natural daylight, so a projector with a very high light output was required. When all the evaluations were complete the Sony VPL-FHZ120L projector was clearly the best choice for the facility.”

To select the most suitable projector for the space, Alex and his team organised a comparison and evaluation of several high-brightness projectors. The comparison took place in the actual space where the projector was to be installed.

Alex continued, “The Sony VPL-FHZ120L, with its 12,000 lumen of light output and 3LCD chip, convinced the judges, the end user, the AV Solution Designer and the Project Manager with its vibrant, lifelike picture. There was good contrast even with the natural light affecting the screen.”

The team at UTS use the new Sony projector connected to a laptop. They are a diverse bunch including researchers and teachers in sport and exercise science, from UTS’s Faculty of Health, all of whom display virtual playing fields from various ball sports on the custom screen. Students or players then shoot balls against the screen and camera measures how precise their aim is against the target being displayed.

Alex added, “The Faculty of Health needed a large screen that would allow students and sport partners to improve decision making in a lifelike environment. That meant the screen needed to be very large, to provide a player with a natural horizontal field of view of about 110 degrees. In addition, the screen needed to be able to take the impact of balls being hit with high speed. Such a screen had never been deployed in Australia. In fact, market research carried out by UTS’s AV Solutions team resulted in mostly negative responses from vendors, raising initial concerns about the feasibility of the solution.” 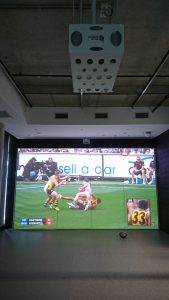 With that said, clever outside-the-box thinking by the UTS team delivered the concept of custom-made gym padding as a projection surface.

Alex said, “Together with a company specialising in the gym padding, UTS’ AV Solution Designer developed a 280” padded screen that could absorb the energy of high-speed balls. The last piece of the puzzle was a high-brightness projector to complement that solution and that’s where the Sony VPL-FHZ120L came in.”

The sport and exercise scientists in the Moore Park facility have reached out to several stakeholders within the Australian sports scene, and everyone who has visited the space has been impressed with the size of the custom screen and picture quality of the new Sony VPL-FHZ120L projector.

Alex Ruch concluded, “ The Sony VPL-FHZ120L projector performs very well indeed and uniquely, the facility is now the only space in Australia where sports skills can be developed indoors in this way, with the ability to display content on such a large, padded surface.”