NZRB Races Ahead with Sony

In 2017 the New Zealand Racing Board (NZRB) needed to update its six SD OB trucks after ten years of extensive usage. Between them they had covered over 1200 OB days of racing per year across New Zealand. The decision was made to buy new trucks from Sony Australia and to kit those trucks out with a significant amount of Sony equipment.

New Zealand Racing Board Studio Operations and Services Manager Media and Content, Jamie Annan explained: “The agreement to purchase new OB trucks from Sony came on the back of Phase 1 of the NZRB Vision Capture Project which resulted in a rescale of the OB fleet from six to four trucks by using a remote production model for greyhound racing. This new model saw eight greyhound tracks serviced by Mercedes Sprinter vans and a complement of Sony cameras linked back to a centralised control room.”

Phase 2 of the project saw the NZRB team working very closely with Sony to design a fit-for-purpose HD capable and scalable OB truck that would fit into an existing and very demanding nationwide OB workflow. According to Annan, Sony’s turnkey offering for OB trucks played a big part in their decision.

Annan continued: “The ability for Sony to provide both truck build and broadcast engineering build in their single Beresfield facility meant that everything they offered was within a true one-stop shop. Design changes and decisions affecting internal layout and function could flow through very quickly, even at the last minute, as all parties were represented in meetings and worked together to solve any issues. This was a major plus for the project and for the NZRB.”

For the NZRB, the final OB design had to provide the same capability to cover racing but be physically smaller in size, which included dropping down a class of vehicle and providing greater cost efficiencies across the production.

Annan added: “Internally the truck had to encompass cost efficient but scalable industry standard capabilities. The combination of Sony’s HDC-2000 series cameras, MVS switchers, PWS-4500 replay server and a Hawkeye judicial replay system offered us the perfect solution that met all of our requirements.”

The daily set up for each new truck covers running up to twelve HDC-2000 series cameras by Sony, commentary, a presentation area and roaming interviews. On a typical day the trucks’ internal crew consists of a director, vision switcher, sound operator, replay operator, engineer and a vision control operator, all operating within the truck. In other words, the efficiency of the crew and the equipment they use is key. 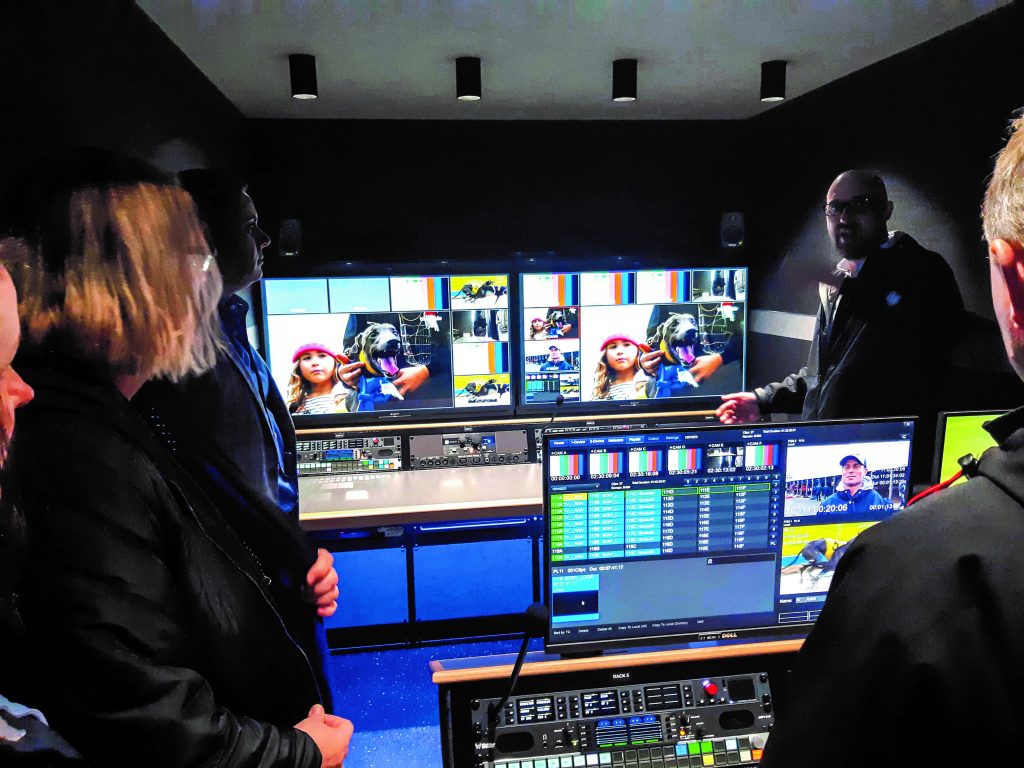 Annan continued: “Sony’s HDC-2000 series cameras were chosen as they offered the ability to fit into our existing Triax infrastructure but also had the flexibility to encompass fibre which is being rolled out across the country. They offered a good combination of cost vs functionality along with the added ability to have two slo-mo cameras integrated into the Sony server.”

The same efficiency and cost relationship applied to Sony’s MVS switchers as Annan explained: “Despite being a smaller truck build, a fully functioning desk was still required as was DVE capability along with RAM storage and transition playback. The MVS switcher ticked all these boxes. Sony’s switchers are the most commonly used in New Zealand OB trucks, so freelancer comfort and compatibility was also a consideration in buying these switchers.”

As the NZRB takes delivery of its new trucks the old OB vans are removed from circulation in a transitionary period that takes a couple of months while each crew becomes familiar with new workflows and engineering requirements.

Annan said: “There is a small amount of carry-over equipment such as contribution linking kit, phone hybrids and lenses that have been retained from old stock, so once the move is complete the old truck is no longer able to operate. The new OB trucks literally and immediately become workhorses and are used up to four times a week, most weeks.”

It’s not just the workload that the trucks have to endure, the infamous New Zealand weather also has to be taken into account as Annan explained: “The OB trucks have to work in all weather, winter to summer, across any of the fifty-plus equine racetracks in New Zealand. In the deep south of the country in winter they are often operating in snow and freezing rain, while in summer up north high humidity and soaring temperatures are the norm. Some tracks have dedicated infrastructure, while some venues only race once or twice a year and require full set ups from scratch including the ability to pull up preconfigured quickly and to reconfigure on the fly. In other words, these Sony OB trucks must have the capability to cope with almost any scenario, and they do.”

NZRB runs a lean operation, trying to avoid overnight and full day pre rigs where possible. The four Sony OB trucks are based strategically north to south across the country’s two islands and between them cover any region within a four-hour drive.

Jamie Annan concluded: “At best a rig can be three to four hours on the morning before a race meeting. Usually all crew are in and setting up with full checks back to MCR an hour before the first live cross, so we rely heavily on the quality and efficiency of our OB trucks. The most significant edge we’ve gained by purchasing these trucks was Sony’s one-stop shop service which enabled them to easily and efficiently build and deliver OB vehicles that were already field-proven. Combine that with our access to the full complement of Sony products that fit NZRB requirements in terms of function and cost, and our trucks are the perfect vehicles for New Zealand racing.”