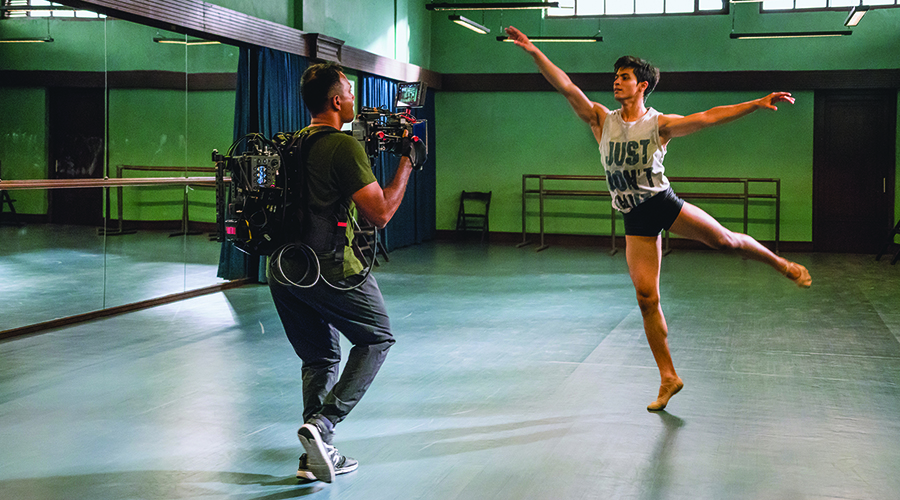 To picture this, one must experience Yeh Ballet (2020), a Netflix original film directed by Sooni Taraporevala and shot by cinematographer Kartik Vijay. The movie is a brilliant mosaic of colors that illuminate the “black swan” moments of two underprivileged dancers, who escape the existential clutches of the Maximum City to pursue their dreams of performing ballet on a world stage.

The screenplay clearly demanded a visual narrative that could not only waltz through the shadowy streets, cramped corridors, and rows of windowless houses that checkered the filming locations but also keep pace with the raw energy of the professional dancers. In effect, the project required a camera that could maneuvre through congested spaces as well as shoot in dark grim places.

“When Sooni Taraporewala approached me for Yeh Ballet, I had already finished two films shooting with Alexa Mini. The last one was The Garden of Evening Mists. The Mini’s form factor was small, but the minute you attached the battery and other peripherals, it became the size of a regular film camera,” said Kartik Vijay, ISC, a top cinematographer, who in the past shot many memorable features, including Manto (2018).

Besides the form factor, the screenplay also sought a creative momentum that could explore the occasionally dark interludes of individual introspection. This, at best, could be exploited by the dual base ISO or the ability to exploit the camera’s sensor information to utilise maximum dynamic range without adding noise signal noise at their base sensitivity, thereby providing two native ISOs instead of one.

“While Panasonic Varicam had the dual base ISO function going for it, I wasn’t too happy with the image as it was too clean. For Yeh Ballet, I preferred an image with a little noise over a clean one. That’s when I heard about Sony VENICE. With the VENICE, you could actually hot-swap between the two base ISOs. You didn’t need to reboot the camera to jump from the first to the second base ISO and vice-versa,” explained Kartik while adding that he could swap from ISO 500 (for higher light levels) to ISO 2500 (for lower light levels) in two seconds.

Another advantage of the VENICE is the Rialto Camera Extension System, which enables the cinematographer to remove the sensor block and extend it up to 18-feet away from the camera body with no loss of image quality. This allows him or her to acquire shots remotely with the same 6K image quality and functionality that VENICE is known for.

“What I also liked about VENICE was the Rialto extension. It reminded me of the Alexa M, which was again a break away from the main body. For Yeh Ballet, I wanted something smaller, and VENICE was just that,” said Kartik. 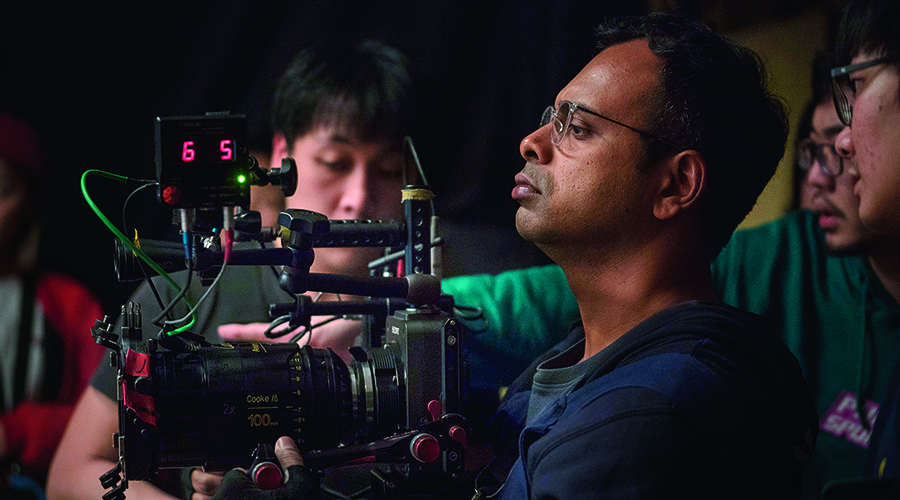 Sony VENICE also has the leverage of a full-frame sensor along with eight stops of optical Neutral-Density (ND) filters, right from 0.3 to 2.4, which works wonders for the cinematographer as he or she doesn’t have to worry about stacking up filters in front of the lens. The verdict was finally out. Kartik chose Sony VENICE and the Sigma Prime lenses for Yeh Ballet.

“The camera was especially useful because I could squat down and go from the feet to the face in one shot. Therefore, I could closely follow the dancers who gracefully moved from one end of the hall to another, and that was absolutely stunning,” added Kartik.

Such was the appeal of the camera that Kartik rode the wave to shoot Ji Hun (The Soul), a Taiwanese supernatural movie that was released in January 2021 and the last three chapters of a powerful documentary titled My Name is Andrea which chronicles the life and times of radical feminist and American writer Andrea Dworkin.

While Ji Hun was shot on the 4K 6:5 Anamorphic mode with legacy Cooke Anamorphic/i primes and Angenieux Optimo Anamorphic Zooms, My Name is Andrea was shot on 6K using the rehoused Meru Anamorphic and Canon K35 lenses.

Since its launch in September 2017, Sony’s VENICE has captured the imagination of some of the greatest auteurs around the world, including James Cameron’s Lightstorm Entertainment, which was the first company to announce the use of Sony VENICE for the principal photography of his upcoming sequels of Avatar (2009).

Shot by acclaimed cinematographer Russell Carpenter, ASC, Avatar 2 is slated for release in December 2022, followed by Avatar 3 in December, 2024. Additional sequels are planned in 2026 and 2028. The buzz cast a spell on the Indian film industry. And one of the firsts to embark on the journey was ace cinematographer Aseem Bajaj, GBCT, who is widely known for filming the eight episodes of India’s first Netflix original series Sacred Games (2018) among other notable projects. Incidentally, it was Russell Carpenter who introduced Aseem to Sony VENICE.

“About two years ago, I had a call with Russell. At that time, he was using the prototype of the VENICE to shoot the sequels of Avatar. Since I had the opportunity to work with him in my first film (Parched) as a producer, he briefed me about VENICE and asked me to try it out. I tested the camera and fell in love with it,” said Aseem who used the camera for the first time in Bhuj: The Pride of India, a historical war drama starring Ajay Devgn and directed by Abhishek Dudhaiya. 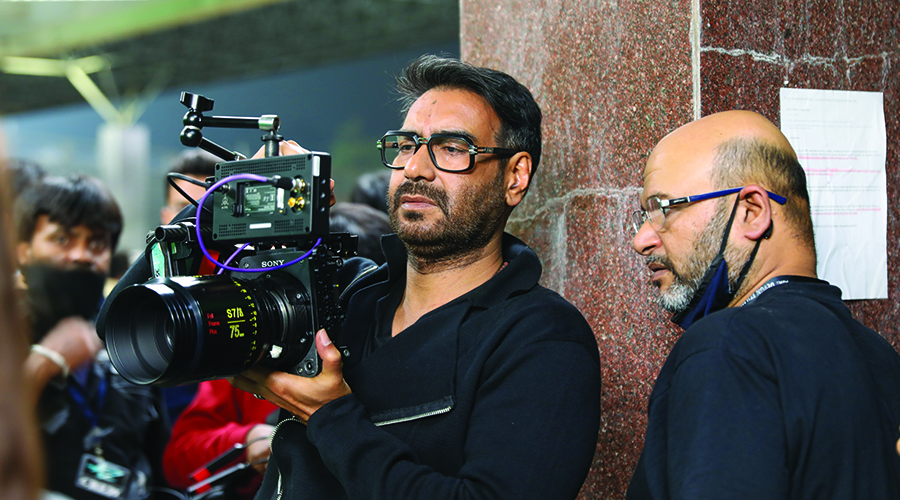 As war stories go, Bhuj was a tough project to execute because there’s nothing more demanding than capturing the looming fear before the outbreak of a war or the specter of destruction caused by the thunderstorm of an air assault. Aseem’s one-point agenda was to deftly capture the realism of war on location and leave little to maneuver in the postproduction.

For instance, there was a 360-degree shot in the movie where Ajay Devgn takes off in a helicopter at twilight. Since the scene of the devastated airbase had to be kept as real as possible, the use of artificial light was ruled out. The cinematographer instead bet on the ability of Sony VENICE to shoot in the dark.

“I decided not to use any light and decided to shoot this sequence wide open and rate the camera at ISO 2000. We could barely see the shot with our naked eyes, but the Sony VENICE wonderfully captured the action,” said Aseem.

Aseem also shared an interesting anecdote while shooting a night scene in Bhuj. The scene featured a tarmac that was completely gutted down by an enemy airstrike and a distressed crowd was supposed to flock towards the runway to repair the stretch. The tarmac was built inside the shooting floor of Ramoji Rao Film Studios in Hyderabad.

“In this sequence, Devgn walked into the studio to perform his shot and asked me why I hadn’t lit the floor yet. I replied that it was fully lit. He said he couldn’t see a thing, so I asked him to look through the VENICE. He was totally astonished. That was when VENCIE caught Devgn’s attention, and we decided to use the camera for our next film Mayday,” revealed Aseem.

Directed by Ajay Devgn, Mayday, which also features Amitabh Bachchan, is a movie about an aviation disaster. In the movie, Aseem effortlessly shot inside the cockpit of a Boeing 737-800 aircraft. It is a sea change from the times Super 35 format was used to shoot the cockpit scenes in Top Gun (1985) as it was impossible to fit 35-mm cameras with large anamorphic lenses inside the cockpit.

“The Rialto has opened up immense possibilities. In Mayday, there is a scene where Mr. Devgn, who is also the central character, is shown flying a Boeing 737-800 aircraft. The handheld shot required him to occupy the pilot seat, and I had to trolly the camera around his face. That was impossible to even imagine earlier,” he said.

In fact, Aseem perhaps holds the rare distinction of using the most number of VENICE cameras in India to date both in terms of the units of cameras deployed per film as well as the number of projects. In Mayday, he used 13 VENICE cameras to shoot a dramatic scene in twilight and heavy rain, followed by 11 cameras for seven consecutive days in a court-room sequence.

Aseem is currently using VENICE for the principal photography of three of his upcoming projects: Inder Kumar’s Thank God, a Netflix Original Production House of Secrets, and Sharing A Ride, directed by his wife Leena Yadav.

For Aseem Bajaj and many of his contemporaries, this journey with Sony VENICE is just a new beginning, a new saga of endless opportunities and immense possibilities, a new way to look at the world, revealing not only how their experiences and their movies draw on each other, but also how they influence and expand the horizon of visual storytelling.