Mark Grinyer explains how Sony is bringing innovative 4K workflows to the world of live production.

Sony shook up the world of production at the tail end of 2012 by putting 4K within the reach of a wide range of budgets with the introduction of its already enormously popular F5 and F55 cameras. It’s now taking 4K one-step-further by announcing an assortment of 4K products that look set to smooth the path for 4K live productions.

The new developments make it possible to use the F55 as part of a 4K Outside Broadcast set up that doesn’t require a wholesale updating of kit for the OB company and ensures an ease of transition from HD to 4K live productions.

However, Sony’s Head of Business Development – 3D, 4K & Sports, Mark Grinyer, provides a word of caution before any live production leaps into the wonderful world of 4K.

Single-chip vs depth of field

“Before you start thinking about 4K there’s a serious consideration to take into account when it comes to 4K cameras versus ‘normal’ cameras,” he says. “4K cameras are single-chip models, whereas broadcast cameras have 3CCD blocks (Red, Green and Blue) and the image is more sensitive to depth of field, which is perfect for live productions such as Top Gear. It’s much more straightforward to get a far greater depth of field with a broadcast camera, compared to a 4K camera.”

Depth of field is related to the amount of light and the control of the iris, and, says Grinyer, “some learning needs to be done around single sensor cameras” to create a similar effect. “The camera operator and the producer/director needs to be aware of what to do [with a single sensor 4K camera] in terms of managing lenses, focus and exposure, to create a similar depth of field to a broadcast camera.” 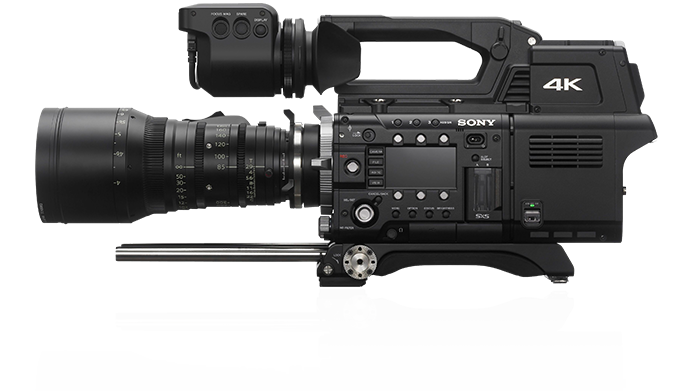 It’s certainly not impossible to emulate the depth of field of a three-chip broadcast camera with the F5 and F55, though, it’s just a skill that will need to be learned. “If you were shooting with a single-chip HD camera you’d struggle to get a look as good as with a three-chip camera,” explains Grinyer. “But 4K cameras are a lot more sensitive, providing more F-stops, so you can adjust the exposure, iris, lenses and other tools available on the camera to adjust the imagery.

Once any issues relating to creating an appropriate depth-of-field have been addressed, there are huge potential advantages in opting for a 4K camera over an HD model, even if you’re delivering in HD. “Anything shot in 4K and down-converted is going to be better than HD, which is partly down to the noise ceiling and signal,” explains Grinyer. “The clearer signal to transmission, the clearer signal you get at home. You get a better picture as there’s a lot more data to down-convert compared to a standard HD image.”

4K cameras are single-chip models, whereas broadcast cameras have 3CCD blocks (Red, Green and Blue) and the image is more sensitive to depth of field, which is perfect for live productions such as Top Gear.

Another key aspect to consider when thinking about 4K is where to position the 4K cameras to make the most of the opportunity of capturing such huge, immersive images.

“The question becomes, ‘Is it worth taking 4K camera and shooting the same as HD or changing the set up for 4K?’,” ponders Grinyer. “In 4K, the jury is still out as to what will create the best imagery and where to put the 4K cameras in a stadium to make the most of the footage. It’s the same considerations as with 3D, trying to find the best positions for the cameras.”

“With the extra resolution, you can shoot wider so it would make sense to have a camera capturing a wide shot of the stadium. Or it could be that one of the 3D positions close in on the action might work well for 4K too, we need to test to find out,” he adds.

It’s obviously very early days for 4K in live production and all this detail needs to be learned, as it had to be for 3D. Sony is currently involved in various 4K test productions, which will provide an opportunity to establish which positions provide the best imagery.

The question becomes, ‘Is it worth taking 4K camera and shooting the same as HD or changing the set up for 4K?'

When it comes to the nitty gritty of shooting in 4K, there are additional practical considerations to factor in compared to an HD shoot, not least of which is how to ensure 4K camera channels can feed into the OB without causing too many headaches. With this in mind, Sony has created a solution to make it possible for its 4K camera the F55 to do just that.

“Sony has built equipment that sits around the F55 to slot it into a 4K live production environment,” explains Grinyer. “There’s a camera adapter for the back end of the F55 that takes the signal from the camera head and feeds it into the OB truck. As far as the OB is concerned the feed from the F55 is the same as a broadcast camera so it slots into the same OB workflow. It’s just a lot more data.”

“On the switcher side, the Sony MVS-7000X and MVS-8000X can work in 4K mode and can already handle a 4K signal. A few software additions are required but that’s all,” adds Grinyer.

It’s worth bearing in mind, though, you use up switcher inputs a lot faster with a 4K production as each 4K camera channel uses up four inputs compared to a single input for HD. Also, 4K records four times as much data as HD so you have to handle a lot more data than with an HD production. “It’s going to be a massive change,” sums up Grinyer.

To enable the recording of all this data, Sony has the SR-R1000 deck, which can cope with the demands of 4K. “Sony SR-R1000 decks can handle 4K and, in the future, there’ll be [Sony’s new 4K codec] XAVC for 4K recordings too,” says Grinyer.

“The SR-R1000 is the ideal equipment for a 4K truck – you can record footage from two 4K cameras into a single SR1000, or you can run eight streams of HDSDI into it, or four streams of 3D.”

The SR-R1000 is the ideal equipment for a 4K truck – you can record footage from two 4K cameras into a single SR1000, or you can run eight streams of HDSDI into it, or four streams of 3D.

A pre-production prototype of the camera adapter for the F55 was recently shown at NAB, and the product is set to launch at IBC in September. No pricing information is presently available.

Grinyer believes its release will go a considerable distance to helping establish 4K in live productions: “4K will escalate quite quickly. The F55 with the new adapter means it works in a 4K live mode or you can use the F55 as a high-speed HD camera or as a handheld run-and-gun camcorder. For OB and live sporting events, the F55 will be a very prevalent camera on set,” says Grinyer.

“There’s already a tremendous interest in shooting sports and live events in 4K due to the quality of the footage and for archiving. It gives any production a significant advantage as there’s more and more demand for 4K content and still very little of it currently available.”

There’s already a tremendous interest in shooting sports and live events in 4K due to the quality of the footage and for archiving.