Famous for its sweet lychees, Hai Duong, which is only 56km from Hanoi, has quickly become one of the most developed and highly industrialised provinces in Vietnam. Reflecting its rapid transformation from a rural enclave to a thriving metropolis is its very own TV station, Hai Duong Television.

Established in 1957, Hai Duong Television operates as an official press agency to promote the policies and values of the Vietnamese Communist Party through a wide range of cultural, art and entertainment programmes to Hai Duong and its neighbouring provinces.

While its role today is very much the same, the station has evolved and found innovative ways to fulfill the task of promoting the Government’s policies as well as the potential of Hai Duong province to a wider audience. These new initiatives include a whole new range of original content programmes, as well as televising its productions through its very own online TV and a network of Pay-TV stations such as MyTV, SCTV, Viettel, AVG and RTB. It is also collaborating with local and national TV stations across Vietnam.

Another area where innovation is clearly evident is the station’s significant investment in broadcast equipment that is capable of handling both Standard Definition and High Definition.

Although the station has targeted 2017 for HD broadcasts, it began its upgrade programme in earnest in 2015.

Amongst the Sony equipment, the station has acquired include the HSC-100R digital triax system camera, the PMW-320 XDCAM EX™ camcorder, the PMW-200 camcorder and the MVS-3000A multiformat switcher. Considered the workhorse camera by many TV stations, the HSC-100R together with the PMW-320 shoulder-mount camcorder was specially chosen to team up with the MVS-3000A Multi-format Switcher in Hai Duong’s OB van, which is used extensively for its outdoor and live events productions. The station also plans to increase the number of OB vans it operates.

To handle the surge in its news programmes productions, the station also invested in the PMW-200 camcorder. This highly rated camcorder records in Full HD 422 at 50 Mbps, and offers exceptional performance, operational versatility and workflow efficiency. It is also the first handheld camera in its class to be equipped with three large, newly developed 1/2-inch Exmor™ CMOS sensors which provide excellent sensitivity and depth of field. 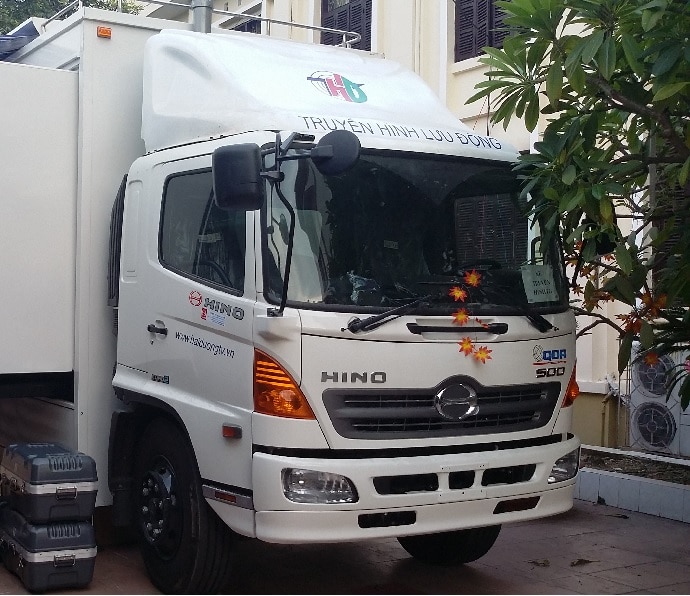 We expect our new investments to give us many years of outstanding performance, which is to be expected with Sony products.

Explains Pham Tien Binh, Technical Manager at Hai Duong Television on the latest Sony equipment to join its inventory, “Hai Duong TV is gearing up for HD broadcasts in 2017. Our new Sony multiformat cameras and switchers will help us deliver high quality programmes to our viewers.”

“They also complement our existing equipment and formats. We expect our new investments to give us many years of outstanding performance, which is to be expected with Sony products.”

With innovation as its mantra, Hai Duong Television is certainly not slowing down in its efforts to bring high quality HD programmes to its viewers.