Contributing to Research and Development in Cell and Gene Therapy Manufacturing 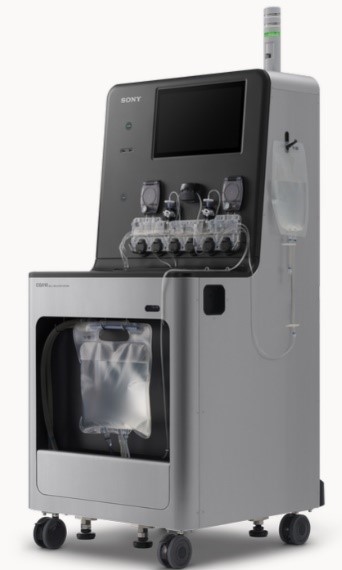 Sony Corporation (“Sony”) today introduced a new Cell Isolation System, CGX10, which sorts cells at high speed and high purity in a closed system. The CGX10’s design enables sorting of cells in a manner that is entirely closed off from the outside environment, making it possible to analyze and isolate cells while maintaining a sterile state. This is especially important in fields such as cell-based immunotherapy, which has been gaining recognition as a treatment for cancer and autoimmune disorders. To produce the cell therapies necessary for this treatment, there is an increasing demand for isolating cells with high purity and high viability in a sterile manner.

It is also expected that this product could be utilized in research for developing cell-based products for fields such as cell therapy and regenerative medicine. It can also contribute to the development and production of cell therapies in compliance with quality and production management regulations (GMP*1).

By introducing CGX10,Sony’s Life Science business will expand from research applications to the field of cell therapies’ development and manufacturing, further contributing to the advancement of cell therapy.

“Cell-based immunotherapy treatment is gaining recognition as a treatment for serious diseases, such as cancer,” said Taisuke Kawasaki, Senior General Manager, Life Science Division, Sony Corporation. “Our Cell Isolation System CGX10 integrates closed multi parameter cell sorting technology, making it possible to accelerate the development of cell therapies. With this product, we are able to move from contributing to life science research to supporting the production and development of cell therapies. We will continue to contribute to society for people’s safety and security by leveraging Sony’s technologies in the life sciences field”

“Until now, the main treatments for cancer have been surgery, radiation therapy, and anticancer drugs. However, in recent years there have been rising expectations for cell-based immunotherapy to be the new, fourth pillar of cancer therapies,” said James Graziadei, CEO of the Sony Biotechnology business. “In addition to a treatment for cancer, cell-based immunotherapy is also recognized as a new treatment for autoimmune disorders such as diabetes and rheumatism. Alongside medical development, demand will continue to grow for cell sorting under the highest levels of sterilization and purity. With the introduction of CGX10, we’ll aggressively support cell therapies.”

Sony’s CGX10 features the ability to use up to ten parameters to isolate a single cell, and the signal is based on excitation from four lasers (405nm / 488nm / 561nm / 638nm), to detect target cells of interest. At analysis speeds of about 15,000 cells per second, it also ensures a purity level of about 97% and higher.

By controlling fluidics, cell damage is minimized, allowing for a high viability of sorted cells. Thus, it can increase the efficiency of the downstream production processes, such as cell culture and expansion for producing cell-based therapies. Furthermore, as this instrument uses fully disposable, single-use plastic tubing/components, any risk of cross contamination between samples is avoided.

Sony is expected to begin deliveries of the CGX10 cell isolation system in Fall 2022.

This product will be exhibited and demonstrated at “Advanced Therapies Week,” a conference focused on latest developments in cell and gene therapies held in Miami, USA, from January 25 – January 28, 2022. There, Aditi Singh, Global Senior Marketing Manager at Sony Biotechnology, and Lise Munsie, Director of Process and Analytical Development of CCRM (Commercializing Living Therapies), will make a presentation titled “Closed Cell Isolation System from Sony: An Introduction and Examples of Use in Protocols for Generating Cell Therapy Products Using Multi Parametric Selection”.

Formed in 2010 through the acquisition of iCyt Mission Technology, Sony’s Life Sciences Business focuses on the research and development of regenerative medicine and immunotherapy.  By utilizing Sony’s proprietary laser optics, such as those used in Blu-ray disc and other optical discs, the Life Sciences business has developed flow cytometers* and the ability to attach fluorescent dyes to cells.

The Life Science Business will contribute to leading medical research and the production and development of cell therapies.

* Flow cytometry: Flow cytometry’ is a method that applies optical measurement to analyze and sort various kinds of cells based on their size, number, exterior surface, and interior content (such as their structure, functions and biomarkers.

The product features Sony’s proprietary closed sorting structure which maintains a sterile state and completes cell isolation inside a chip. Within the chip, after the cell has been analyzed, the selected cell will be isolated by controlling the flow of the liquid. 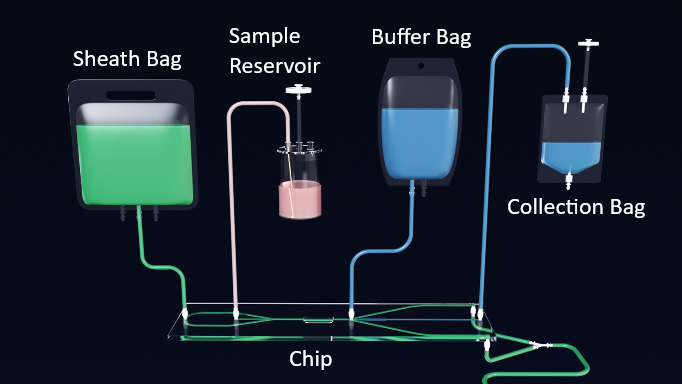 Based on use of up to ten parameters (cell markers) obtained from excitation using four lasers (405nm / 488nm / 561nm / 638nm), the instrument can sort a massive number of cells at high speed and with high purity. Furthermore, the user can change the priority settings for sorting. With the purity priority setting, purity will reach about 97%, and with the speed priority setting, the speed can reach roughly 100,000 cells analyzed per second.  As a result, it achieves a level of productivity suitable for the mass production of cell and gene therapy manufacturing.

In addition, cell damage is minimized by proper control of the liquid. This ensures a high viability of cells, which increases efficiency in the next stages, such as gene transduction or culturing of the isolated cells.

The tubing kit includes a plastic tube specifically made for controlling the liquid that comes in contact with the sample. This single-use disposable tubing is intended to be replaced after each use. A new tubing kit can be used for each patient, avoiding contamination between samples.

This instrument is designated for use in cell-based immunotherapy settings including gene therapy, as well as cellular manufacturing for GMP regenerative medicine. Sony will provide user support by distributing the compliance support documentation necessary for GMP manufacturing, such as the CoA (analysis certificate), animal-free production certificate, and product information files.

* The Cell Isolation System CGX10 is designed for use in GMP manufacturing of ATMP / regenerative medicine including cell and gene therapy. CGX10 is not a medical device.

* This machine is a class 1 laser (JIS standard) product.

* Companies and product names mentioned are trademarks or registered trademarks of each company.