Daniel Dubreuil explains how the benefits of Sony’s TRIMASTER EL™ OLED monitors are now being extended to the world of Outside Broadcast.

The TRIMASTER EL™ range, which provides a multitude of advantages over previous monitor technology, has only been around for 18 months but has already sold over 20,000 units worldwide.

“The key reasons you’d want to replace LCD with OLED in an OB truck is the quality improvements in extremely high contrast ratio, wide dynamic range and the details in the blacks now being visible,” explains Sony’s Senior Product Specialist Daniel Dubreuil. 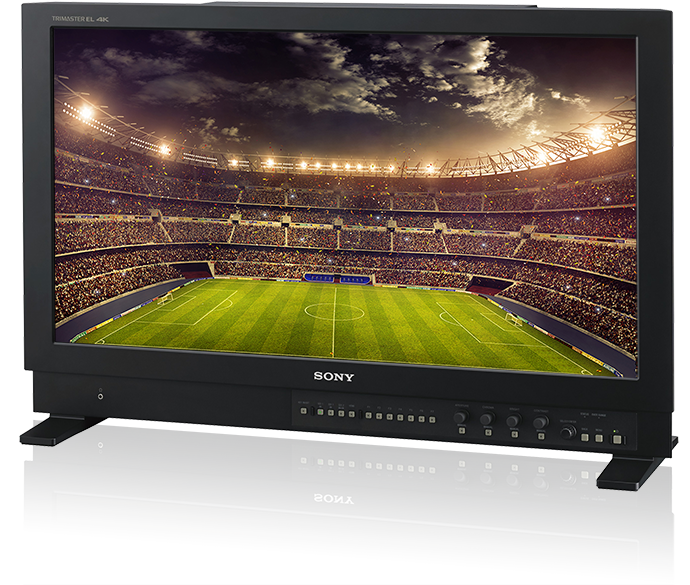 “The issue in the previous decade has been that the camera is capturing images the LCD screen isn’t able to properly represent. The screen was therefore limiting the capability of the camera, which is clearly not good for the production. Black level control is always critical and OLED provides a much better level of low luminance details to be able to accurately adjust black levels.”

“Also the advantage of OLED for fast moving sports is there’s no LCD molecules to move from one state to another so it’s very quick and efficient in terms of motion, just like CRT,” adds Dubreuil. “For sports, where it’s important not to have any blur, that’s one big advantage over LCD. Obviously, motion isn’t necessarily the key element in other live productions such as opera, but here the representation of blacks is key to creating a beautiful picture, so OLED would still be a huge benefit.”

The choice of TRIMASTER EL™ OLED reference or picture monitor boils down to the BVM-E, BVM-F and PVM ranges, with all offering truer, deeper blacks, detailed gradations, virtually no motion blur, extremely high contrast ratio and wide dynamic range. PVM picture monitors don’t have the accuracy and consistency of the BVM series, but are more affordable and well suited to the OB and studio environments.

Black level control is always critical and OLED provides a much better level of low luminance details to be able to accurately adjust black levels.

“For camera control, the 17” BVM-F170 is the highest quality choice as a reference monitor for this type of application thanks to its very accurate colour reproduction and picture consistency. And there’s the same size PVM-1741, which is a cheaper version that still has the benefit of true blacks,” says Dubreuil.

But while the PVM offers a cost-effective means of upgrading to OLED technology, there’s no disguising the fact that replacing an entire LCD monitor wall with TRIMASTER EL™ screens is a fairly lavish expense.

“It seems quite expensive, but if you’re building a new truck it makes sense to go for OLED,” believes Dubreuil. “Russian OB company ANO installed OLED monitoring throughout a series of trucks we built for them, including OLED monitor walls based on our 25” OLED screens, with a quad split so there are four images per screen.”

“To have a full OLED monitor wall might be seen as quite extravagant but the result is fantastic,” he adds. “The transition is usually from CRT to LCD to OLED, but when considering moving directly from CRT, it’s great to jump straight to OLED due to the improvement in picture quality, whereas you may be disappointed with LCD if you decide to go down to that.”

However, Dubreuil points out that a commonly used, cost-effective way for OB trucks to benefit from OLED without going over budget is to have predominantly LCD monitors complemented by a number of OLED screens for reference. “So a screen such as the PVM-2541 or BVM-F250 are used for Program and Preview mainly, and the rest of the screens are LCD.”

It seems quite expensive, but if you’re building a new truck it makes sense to go for OLED.

Customers which have recently installed TRIMASTER EL™ OLED reference monitors in their OB vans include ATM System in Poland, DutchView in Holland and Turkey’s Ozkan Productions.

Ozkan installed a total of 40 Sony TRIMASTER EL™ OLED monitors in its latest OB vehicle (34 x 17” PVM-1741/6 x 25” PVM-2541 monitors). “Our van, which has been fully equipped with Sony’s OLED monitors, is the first of its kind and has been designed to fully meet the needs of producers and directors. With its Full High Definition capabilities and OLED monitors, we believe this van is able to provide the most realistic colours and image quality ever seen in an outside broadcast vehicle,” says Tuncay Ozkan, General Manager of Ozkan Productions.

With its Full HD capabilities and OLED monitors, this van is able to provide the most realistic colours and image quality ever seen in an outside broadcast vehicle.

So, what’s next for the TRIMASTER EL™ series? “We’re introducing the ‘A’ series of TRIMASTER EL™ OLED monitors with a dramatic improvement in viewing angle in comparison to conventional OLED display,” says Dubreuil. “The ‘A’ series will be available in May as both PVM and BVM versions and will replace the current line-up”.

“Concerning the emerging 4K market, we’re starting off with a 4K LCD screen – the new PVM-X300 – which Telegenic in UK will be using for its 4K live productions OB van,” he adds.

“Looking ahead, we are also presenting new 4K OLED monitors as a technology demonstration at NAB. The picture quality is amazing and no doubt Sony will introduce such high quality products in the future. Higher resolution in OLED is a direction we want to go in.”