Quang Ngai Province may be located halfway between Hanoi and Ho Chi Minh City, but it has all the trappings of a rising vibrant city. Thanks to its strategic location in the Dung Quat Economic Zone, Quang Ngai, is the gateway to a thriving economy focused on agricultural, processing, oil refining, maritime and tourism industries.

Home to a population of 1.3 million people, Quang Ngai’s preferred medium for information and entertainment is television, particularly programmes from its free-to-air TV station, Quang Ngai TV (PTQ). The preference for television over other mediums is typical across all of Vietnam’s 59 provinces and 5 municipalities. Interestingly, it is not only broadcasters in the big cities that are investing in new technology but many provincial broadcasters are embracing High Definition and gearing up for bigger things to come.

Quang Ngai TV (PTQ) is no different. The result of a merger in 1990 between the radio station and TV stations of Quang Ngai Province, PTQ was established by the state government primarily as a press agency to promote the policies of the Vietnamese Communist Party through a mix of news, cultural, art and entertainment programmes.

PTQ broadcasts a mix of content drawn from Vietnam’s national broadcaster VTV, as well as produces its own range of programmes to meet its diverse audiences at Quang Ngai as well as its neighbouring provinces like Quang Nam, Kontum, Binh Dinh and Gia Lai via a network of cable TV stations.

A Sony client since its inception, PTQ has relied on Sony products like the BVP-570P portable studio camera, HVR-Z7P camcorder and the PXW-X200 XDCAM™ camcorder to produce a wide range of original programmes for the station, many of which have gone on to win top prizes in Vietnam’s National Television Festival.

Recently, as part of its on-going efforts to enhance its production value and to reach a wider audience, PTQ invested in new Sony equipment like the HSC-100R studio camera, PMW-400L XDCAM camcorder and MVS-3000A switcher.

Says Nguyen Thanh Son, Deputy Director at PTQ on the new Sony acquisition; “PTQ is ramping up to deliver a better experience for our audiences. This includes both improving programme content as well as infrastructure. Working closely with Sony, we identified products that will help us in our new chapter of growth.”

The new Sony equipment will be deployed both at PTQ’s studios as well as in its newly commissioned Outside Broadcast van, the first of its kind in Quang Ngai.

Working closely with Sony, we identified products that will help us in our new chapter of growth.

The HSC-100R, a mainstay studio camera for many broadcast stations around the world, was chosen as it supports both SD and HD codecs, and delivers outstanding picture quality thanks to its three 2/3” CCD imagers and offers low-latency digital Triax transmission at 1080 @ 59.94i/50i and 720 @ 59.94P/50P.

Completing the line up is another fixture in many studios and production houses, the MVS-3000A dual-format switcher.

Explains Son on the special emphasis for dual-format equipment; “Due to PTQ’s diverse audience and reach, we are still producing SD programmes. Our aim is to increase our HD programmes steadily, and we have chosen Sony products that are capable of meeting our needs now and for the future.”

Besides image quality, another key criteria for PTQ in its equipment selection were the product’s build and durability. Quang Ngai’s topography is blessed with long stretches of seacoast as well as mountainous terrain. Adds Son; “Quang Ngai’s terrain as well as tropical weather is a challenge for our equipment. We have seen how our previous Sony products measured up against the elements and we are convinced of its durability and quality.” 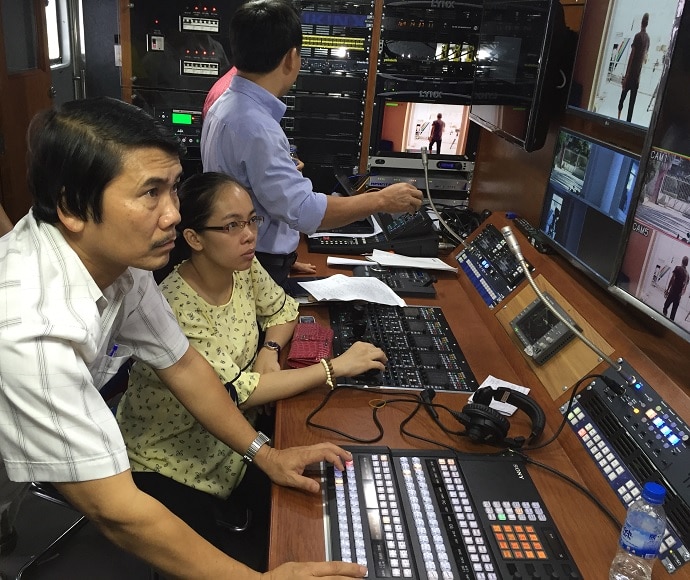 Concludes Son; “When it comes to equipping a studio for the future, it always pays to choose a partner that will stay with you for the long run. Sony has helped us evolve, and we hope Sony will help deliver a winning experience for our TV production crew and of course, our viewers.”