Serving as archive central for one of the largest production companies in North America requires world-class storage capabilities. Within an 85,000-square foot corporate office facility in North Hollywood, Endemol Shine North America, houses storage for each megabyte of data generated by its deep roster of hit programming including MasterChef, The Biggest Loser, Deal or No Deal, and Extreme Makeover: Home Edition. Every camera master, offline edit proxy, online edit proxy, and all show-generated media resides on storage drives in North Hollywood – every megabyte of data generated over the course of production.

After using a combination of LTO-5 storage and four Sony first generation ODS-D77U standalone optical disc drives for several years, Endemol Shine North America is transitioning to become a fully Sony ODA (Optical Disc Archive) facility with the addition of four new Generation Two ODS-D280U ODA units. The switchover is the result of a number of factors related to the large volume of material, including: the need to save on expenses, refine overall workflows, prevent data loss and reduce maintenance requirements. 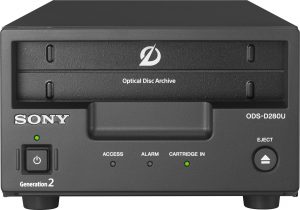 When storage was on LTO tapes, the post-production team at Endemol Shine North America housed the tapes in an off-site, climate-controlled warehouse, which was costly. As an illustration of the physical space that requires, shows such as MasterChef, for example, generate between 70-80 cubic feet of boxes.

“With LTO, it was necessary to have climate controlled off-site storage,” explained Alex Palatnick, Vice President of Post-Production, Endemol Shine North America. “Climate-controlled storage is exceptionally expensive. But magnetic media is very susceptible to humidity and temperature over time. If you put LTO tapes in a warm room, say, 80-90 degrees for a year or two, you’re going to have a dramatic impact on the ability to get data off that cartridge. So, it was a necessity to have them in such an environment. With ODA, that issue does not exist. ODA has a life span at least two to three times that of LTO. For us, that means we don’t have to have climate-controlled storage for our newer shows. Anything you can do to either reduce your footprint or not have to use a climate-controlled environment, will save significant cost over time.”

While Palatnick notes that the speed of Sony’s first-generation ODA product was “very solid,” he is excited about the higher density, lower cost per GB, and speed of the second generation ODS-D280U ODA drives. “The second-generation cartridge has twice the volume of the first and costs twenty percent less to purchase, which means that the cost per gigabyte drops to around four cents. It’s roughly a 46 percent savings switching to the second-generation cartridge. And when you couple that with offsite storage savings, we start getting into some serious savings. It’s very much a long game with this product.”

The idea of being able to have a medium such as ODA, with speeds as fast as LTO, random access and data longevity, is something that we’ve been looking at very closely.

Another positive Palatnick points out for optical disc storage versus tape is that the potential for data loss on discs is virtually nonexistent. Optical Disc archive has the most robust bit error correction in the industry and is not susceptible to magnetic bit rot. In an unlikely event, if a disc was damaged, it doesn’t result in damage to the entire cartridge, as is the case with LTO-based storage: “With LTO tape, if you have a problem with the cartridge, you can lose the entire thing. With ODA, because of the individual discs that comprise the cartridge, the potential loss is compartmentalized.”

Endemol Shine North America was looking for a storage system that would require little to no maintenance, and that’s precisely what grabbed their attention after transitioning to ODA. “Right out of the gate, we saw there was zero maintenance with these drives. With LTO drives, depending on how much volume you have within your facility, you need to clean each drive at least once a week. With ODA, it’s all laser. It’s one less thing for the librarian who pilots the system to have to worry about. When we’re in production, we put a lot of data through the storage drives, and we’re very demanding.

The transition process to ODA has been similarly easy. Endemol Shine North America has remaining LTO infrastructure because of their library of legacy content. But all new content is stored on Sony ODA drives, which is a change that literally happened overnight. “No joke, it was overnight,” said Palatnick. “This has been a very transparent transition for us, to move from LTO to ODA. Everything at this stage of the game goes to ODA, and it’s a much easier cartridge to manage.”

Palatnick describes Sony as the “defacto king of the optical media hill” based on its development of XDCAM and ODA. “Sony is the only company to belly up to the bar in terms of optical media for archive and come up with a viable solution,” said Palatnick. Others transitioning to ODA he believes are also looking at cloud-based solutions for long-term storage. He doesn’t see this as a viable alternative for the immediate future. “I will never give up hard assets ever,” he explained. “In the event we run into a failure, we have to retain the ability to recover from it quickly. The only way I can see a cloud-based storage solution being viable, is to have something transitional, which would be ODA. And I think that ODA absolutely has a long-term presence, even with cloud-based archives running simultaneously. So, you can still run ODA, and have cloud-based archives at the same time.”

Palatnick attributes his affinity for the physical assets to the start of the file-based workflow process roughly ten years ago: “It became critical to find a way to manage the amount of information that was coming in from the field. Back then we used all LTO tape storage. It was very important for everybody to have that hard asset. So many times, a producer would be on set, and they love the idea that when a cartridge comes out of the can, whether it’s videotape or an XDCAM disc. That’s not something that you can easily delete or lose. With a file, it just comes out of the camera, somebody hits the wrong command, and you’ve got a problem. With ODA, we still have the ability to create that hard asset for the executive producers and the owners of the company but know we benefit from its Archival Disc technology, especially over the long term.”

Fully backward-read compatible, the Sony Optical Disc Archive drive technology provides read capability for all generations of optical disc cartridge media. Generation 2 drives and media enables content access for 100+ years while eliminating the need for a forced media migration due to media and drive obsolescence. The drive unit handles a single optical disc cartridge that offers an alternative to traditional forms of data tape and secondary RAID (HDD/SSD) for the longer-term archiving of valuable assets.

The Sony optical disc cartridge offers very fast random access to all content and files. The drive laser design provides for ‘dual channel’ capability and, being file format independent, it can store assets in a data file format.

The Sony Optical Disc Archive system uses Archival Disc media, ideal for active warm, cold and hybrid cloud applications, where data tape, HDD’s and other traditional forms of storage does not provide the assurance or meet the need for write-once, immutable media.  It also provides an archive copy for economic data preservation and storage compliance in the Media & Entertainment, Government, Law Enforcement, Medical and Legal industries.