Make small changes and save time to get on air with linear editing on XDCAM.

Linear editing may be unfamiliar to many people, but from the birth of videotape in the 1950s to the rise of non-linear editors in the 1990s, it was the only way to edit video. Before video, editing involved film, a knife and glue. The first live broadcast edits involved “cutting” between different cameras at the command of the director. With the advent of video recording, linear editing became possible. Linear means that, to record or search for material on a tape, the editor needs to move linearly along the tape, back or forward, until the required segment of contents is reached. There are two types of linear edits: assemble edits and insert edits.

With assemble edits, two tape machines are connected together with an edit controller in the middle, with one recorder acting as the player and the other the recorder. The tape in the player is simply wound backwards and forwards to reach the first segment to record, which is then recorded on the tape in the recorder. Then the next segment is located and, in turn, recorded. This continues until the story is complete. If subsequent changes need to be made, it is necessary to rewind back to the point of change on the recording tape, then start the process from that point, including recording again all the segments that come after. 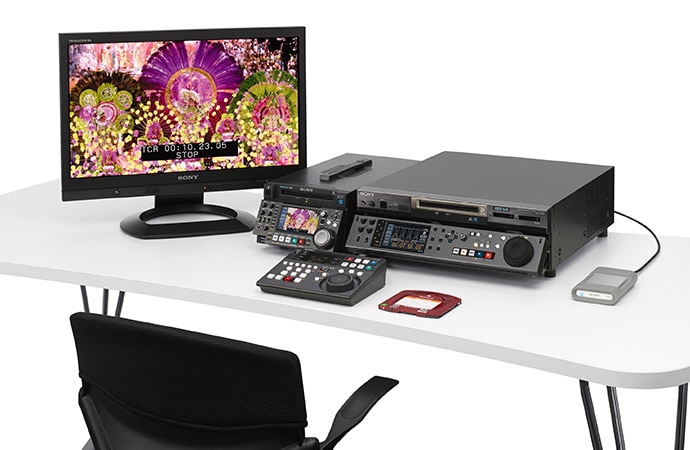 With insert edits, the process is the same, but once the program is complete and ready to be broadcast, it might be necessary to make a change. Instead of having to rewind to the point of change and start the assemble edit from there, it is possible to crop a new segment to the exact length of the segment you want to change and literally insert (or replace) the old segment without changing what follows or precedes it. This method is much faster than a full assemble edit and does not require any rendering as you would with a non-linear edit from a computer to media (tape or otherwise).

Edit immediately with no render time

Because of the speed and no need for rendering, insert editing is becoming increasingly popular for very fast turn-around content. XDCAM HD studio decks including the PDW-F1600 and PDW-HD1500 (with option) and all the XDS decks (with option) offer the possibility of linear editing. Once the edit is done, the material is immediately ready for on-air play-out with no render. For example, if a program that is just about being put on-air needs a rework because an update has just arrived, with a very few operations, the AV content can be modified and immediately put on-air with a great time and money saving. Linear editing is a great tool even when contents need to be slightly trimmed and quickly distributed or transmitted to a final destination. It is a great idea from the past that is perfect for today’s ultra-fast workflow.