A full-frame sensor is most simply deﬁned by its sheer size—36 mm by 24 mm—and the distinctive look it makes possible. Compared to a Super 35 mm sensor, a full-frame sensor has over twice the surface area while providing a wider angle of view and shallower depth of ﬁeld.
Full-frame sensors are by far the largest image sensors in general use today and are widely regarded as the pinnacle of digital cinematography—due both to the inherent advantages of full-frame itself and a wide array of cutting-edge supporting technologies.

The physical dimensions of a full-frame sensor date back to the early 1900s when 35-mm film emerged as a universal standard for filmmaking and, later, as 135 film for stills photography. In traditional movie-making, film travels vertically through the camera, providing a variety of different image formats.

One of them, 3 Perf, uses just three perforations in the film per frame equating to an individual wide-screen frame of 24.89 mm x 14 mm, commonly referred to as Super 35 mm. For stills photography, film travels horizontally through the camera, providing the largest of all the popular image formats for 35-mm film, with a 36-mm by 24-mm frame, using eight perforations on the film for each frame, traditionally called full-frame.

At the turn of the 21st century, digital cameras with Super 35-size sensors (including Sony’s revolutionary F35) proved good enough to challenge film cameras, and started the digital revolution in Hollywood and across the world. For the next generation of filmmaking cameras, however, manufacturers began to think bigger than Super 35. A lot bigger.

Full-frame copies the frame size from 35-mm film still cameras, allowing the same lenses and lens mounts from older film cameras to be used in new digital still cameras, with the same look and feel, principles of photography, framing, focus and depth of field. It also allows for backward compatibility with Super 35 and other formats.

Since a full-frame sensor is bigger than a Super 35 mm sensor, it naturally captures a wider image. Shooting from the same position with the same lens, a full-frame camera allows you to see more of the scene, which can be helpful in certain situations. The below images help illustrate this.

Format Flexibility thanks to Full-Frame

The use of a full-frame sized sensor, in particular one with 6K of pixels, allows the camera to support many different shooting formats by selecting different scan areas. A 6K full frame sensor can provide a native 4K super 35 mm as well as a multitude of anamorphic modes*1 including 35­mm open gate. This means that with one sensor you can choose whether to shoot with dedicated full frame lenses, traditional super 35­mm cine lenses, or anamorphic lenses. When using 4K super 35­mm scan the camera will perform without compromise compared to any other conventional 4K super 35­mm camera. Sony’s Venice camera supports a particularly large range of user-selectable imager modes and aspect ratios. The FX9’s also supports a 2K super 16­mm scan mode*2.

Since a full-frame sensor is bigger, this can mean higher resolution (with more photosites) or increased sensitivity (with larger photosites) or, as is usually the case: a careful mix of both. High resolution can also be used for oversampling where the sensor captures more pixels than required in the final image, but uses advanced image processing in the camera to boost clarity and retain fine detail that might otherwise be lost with a smaller sensor with less resolution. 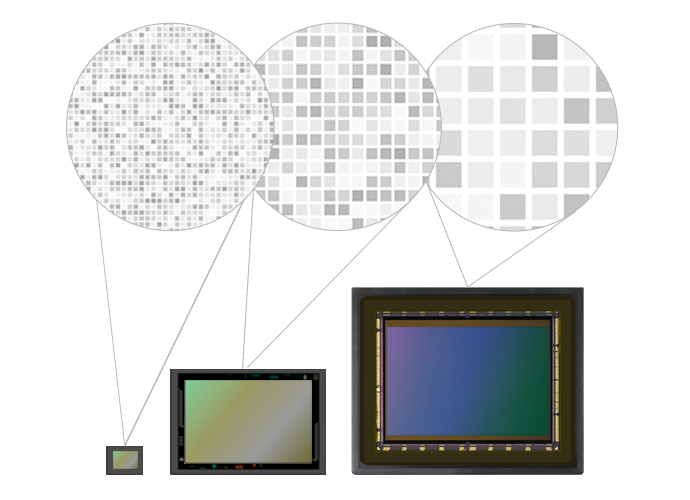 Aliasing noise is generated when the frequency component contained in the input signal is higher than ½ of the sampling frequency (Nyquist frequency) in the process of signal sampling. When the resolution is lowered, aliasing noise tends to occur. By shooting 4K with a 6K full-frame sensor, aliasing noise is reduced and imagery is sharper and cleaner. 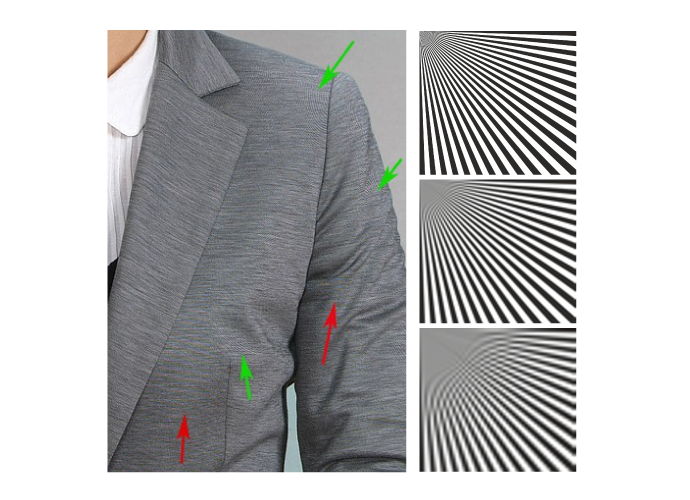 A full-frame sensor gives you the ability to use a huge range of Full Frame, Super 35­mm, Photo and Cine lenses. 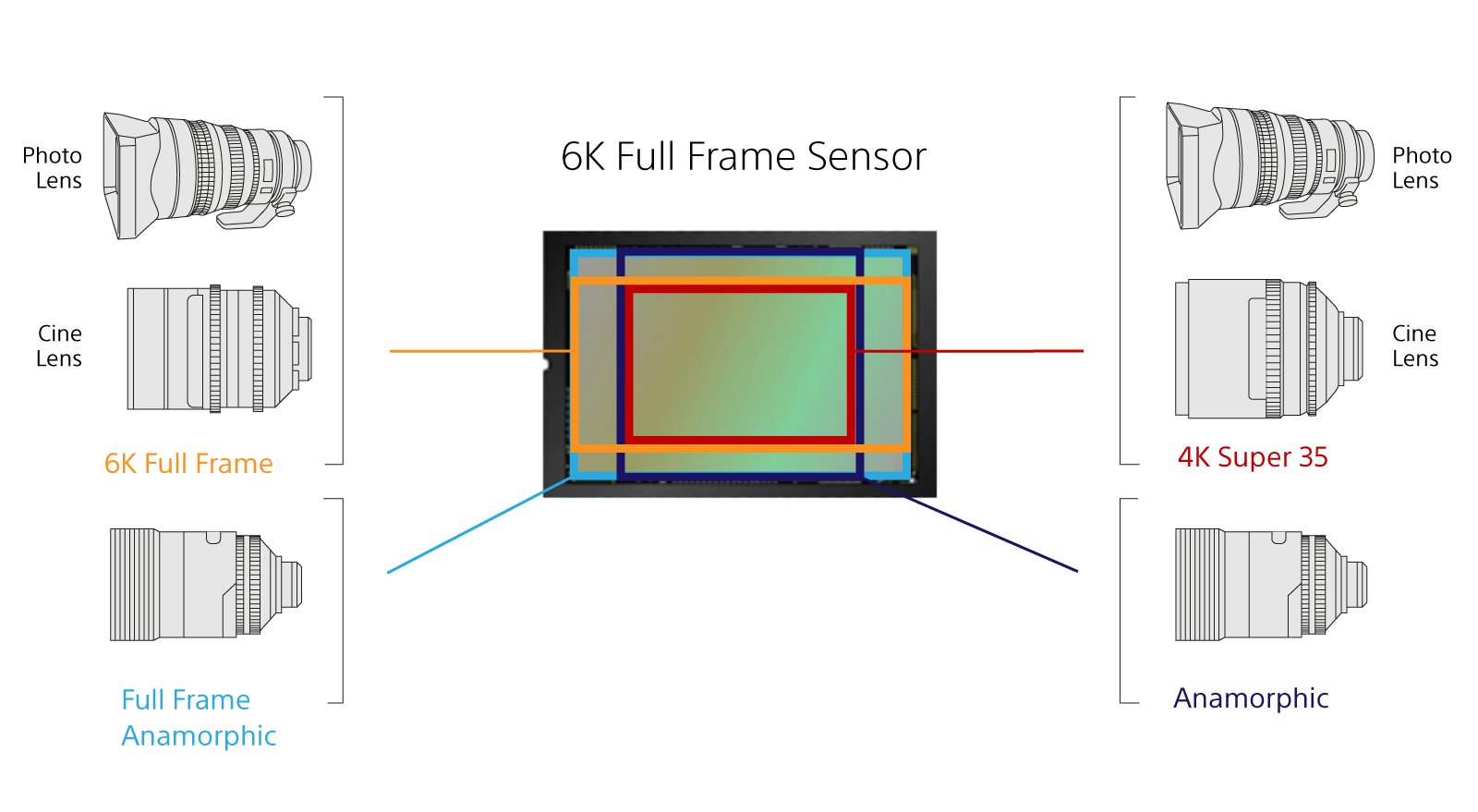 In addition to all the inherent benefits of full-frame sensors, there are additional technologies that can further enhance real-world performance and creative flexibility.

Dynamic range is normally measured in stops, a measure of the aperture or iris in the lens. A better sensor is able to differentiate more stop levels of gray between black and white. For instance, the human eye has a dynamic range of about 10–15 stops.

Full-frame sensors can provide enhanced dynamic range with a relaxed design space and larger photosites. Sony’s Exmor R sensor, adopted by FX9, extends this benefit by radically realigning the pixel structure as shown below. Consequently, Sony full-frame sensors can achieve dynamic ranges equal to, or even exceeding, what the human eye can capture.

Back-illuminated sensor as used in FX9

Digital imaging sensors perform best when set to their base ISO. It’s at this base ISO value you will achieve the optimum balance of low noise, the best signal-to-noise ratio, and almost always, the widest possible dynamic range. This is because at the base ISO setting, there is no amplification, or gain (voltage), added to the signal coming from the sensor. Adding gain to increase the ISO, or to make the image appear brighter, adds noise and in most cases will reduce the dynamic range that can be recorded. Increase the gain to make an image appear twice as bright and you’re also introducing twice as much noise to the signal, and the image quality is thusly decreased. While grain on analog film, like at ASA 400 for example, might be pleasing and enhance the feel of an image, the introduction of digital noise to an image rarely brings a similarly pleasing result.

To help avoid this, the VENICE and FX9 camera’s full frame sensor has what is termed Dual Base ISO. Dual Base ISO means the camera’s imaging sensor has two distinct sensitivities to light. At each ISO there is very little difference in image quality. Dynamic range and color are almost identical and noise is not significantly different.

VENICE has a base ISO of 500 to provide the optimal dynamic range for applications where on-set lighting is standard. A secondary High base ISO of 2500 excels in low-light High Dynamic Range capture. FX9 features a base sensitivity of ISO 800, providing the optimal dynamic range for applications such as shooting outside or in brightly lit interiors. A secondary High Base sensitivity of ISO 4000 excels in low-light scenarios. You simply use the base ISO most appropriate for your light levels without any significant change in image quality or any need to change your workflow. 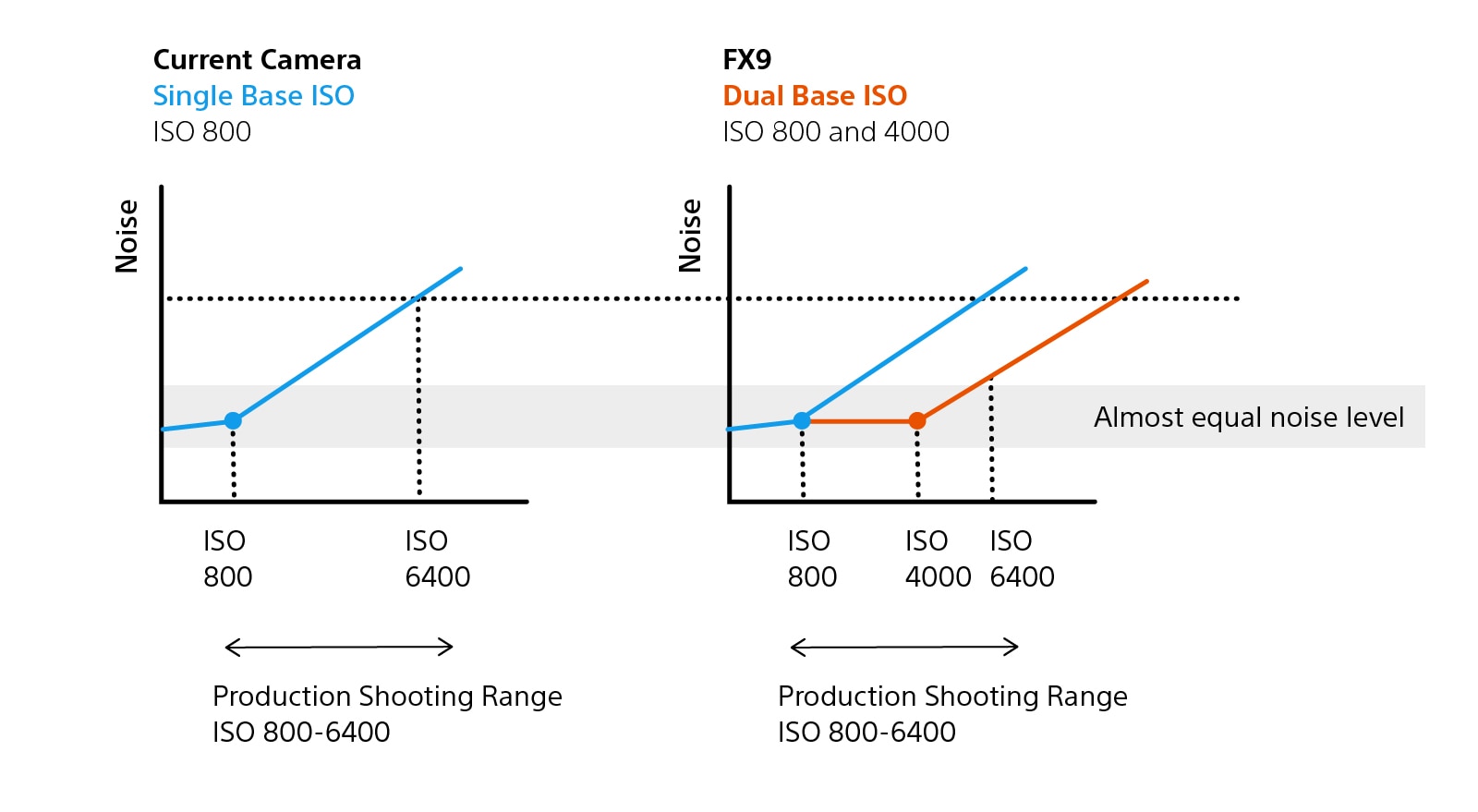 Creative use of the electronic variable ND filter with full-frame

FX9 is the world’s first full-frame camcorder with an electronic ND (neutral density) filter which, at its simplest, removes the need for manually fitting and changing fixed filters. This is no small benefit, but by combining a full-frame with a large aperture auto-iris lens and an electronic ND filter, it is possible to create scenes that change in ways never seen before. Alter the ND filter during the shot and the iris will automatically adjust to maintain good exposure, thus changing the depth of field as the scene progresses. If the lens is not an auto-iris type, no problem! Simply switch the electronic ND filter to auto, and adjust the iris during the shot to create the same effect. Take a look at the Electronic ND Filter Tech Guide for more information on how to use the electronic ND filter. 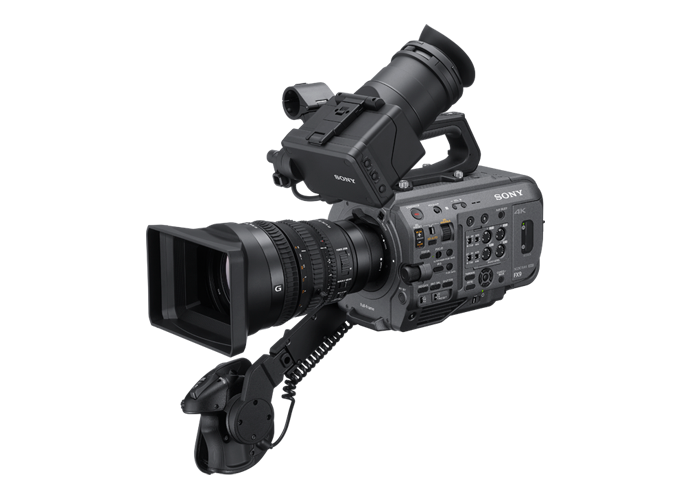 The FX9 features a full-frame 6K sensor with high-quality recording in DCI 4K,* Ultra HD and HD resolutions. Powerful image processing with debayering and oversampling ensures image quality beyond the limits of conventional Super 35-mm sensors. It is the world’s first full-frame camcorder with electronic variable ND, Fast Hybrid AF and has Dual Base ISO 800/ISO 4000. 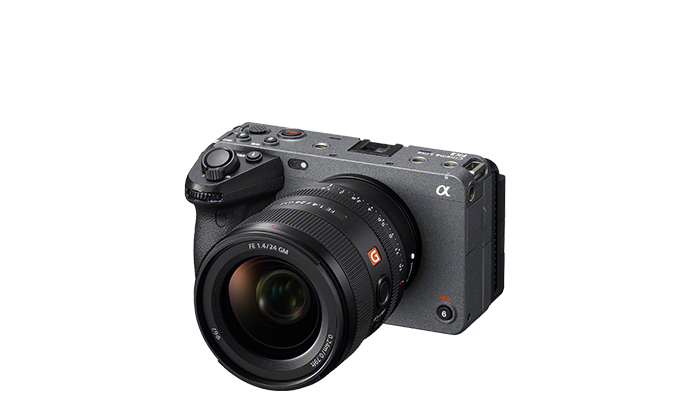